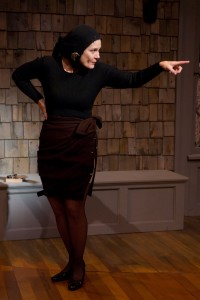 The first thing I’d like to say about the musical “Grey Gardens” (apart from the fact that it’s very, very good) is that its success doesn’t depend upon an audience’s familiarity with the 1975 documentary of the same name and on which it is partially based. In fact, it doesn’t even demand that you know anything about “Grey Garden’s” non-fictional main characters, Edith Bouvier Beale and her daughter, “Little Edie,” other than they were relatives of late former First Lady Jacqueline Kennedy Onassis and her sister Lee Radziwill.

What’s also striking about “Grey Gardens” is its sense of humor. And would you expect anything less from a musical about two famous socialites turned infamous bag ladies holed up in a flea-infested estate with fifty-one cats? In less adroit hands this humor could have turned mean, and the story of a co-dependent mother-daughter duo fodder for freak-show camp theatrics. Luckily, the book writer responsible for celebrating and making us laugh with—yet not at—these defiant female eccentrics who lived their lives on their own terms is Doug Wright. Wright, of course, is a gay American playwright who grew up in the Bible Belt and won every major theatrical award, including the 2004 Pulitzer Prize for Drama, for “I Am My Own Wife”, his fascinating true story account of Charlotte von Mahlsdorf, the East German transvestite who survived Hitler and the German Stasi to become an international icon of the gay community until his/her death. In other words, personally and professionally Wright knows a little something about outsiders, oppression and beating the odds. He’s a writer who prefers to probe in lieu of providing answers, which is why I’m not surprised that, as with “I Am My Own Wife,” “Grey Gardens” left me with more questions than answers. In the case of “Gardens,”  when does it all stop mattering—washing your clothes, picking up after your fifty-one cats, basically giving a shit about your hygienic housekeeping? And at what point do we become prisoners and victims of the parental love that nurtures us?

Yet despite such “big” questions, “Grey Gardens” is a musical, and at times an old-fashioned musical comedy at that—ultimately entertaining, occasionally tuneful, sometimes openly sentimental, and funny. The first half, depicting Edith and Edie in their socially healthy younger years, is chock full of composer Scott Frankel’s charming, Tin Pan Alley-inspired musical numbers boasting Michael Korie’s Sondheim-like clever lyricism. Act two, set three decades later at which time mother and daughter are reclusively living out their sad and lonely existence, emphasizes thoughtfulness over wittiness in its character-driven meditation on thwarted and unrequited love, reprises musical leitmotivs to haunting effect (“The Girl Who Has Everything”), and gives us a tender ballad in “Jerry Loves My Corn,” musically reminiscent of “Into the Woods’” “No More” but with the maverick lyrical sensibility of David Yazbek’s “You Rule My World” from “The Full Monty.” Although it’s not a score whose original cast recording I’m running off to buy anytime soon—I could have used a few more memorable tunes—in the theater it does its job by holding your attention and by contributing to the work’s overall beautifully strange oeuvre.

This Northlight staging stars Hollis Resnik in the role of Edith during the first half and the adult Little Edie for the second, and her ability to convey both of her characters’ psychological eccentricities during song, without going into crude caricature and while sustaining her melody lines, proves that she remains Chicago’s first lady of the musical theater. BJ Jones directs and Marla Lampert is responsible for the amusing musical staging. (Fabrizio O. Almeida)