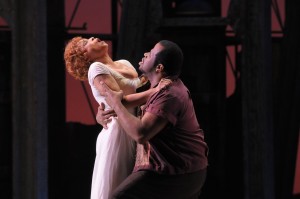 We all know its songs, we all love them—indeed, “Summertime” is the single most recognizable operatic aria on the planet—and standards such as “It Ain’t Necessarily So,” “Bess, You is My Woman” and “I Got Plenty O’ Nuttin’,” among others, are all known and loved around the world. Why then, did it take more than half a century—not to mention that the piece was already some 20 years old when Lyric first opened its doors—for “Porgy” to have a hearing at Lyric?

One reason is the enormous expense involved in recruiting and training an entirely new chorus for a single work since the Gershwin estate mandates African-American performers even as choristers, and there are currently only two African-Americans singing in the entire Lyric Opera Chorus. There has long been sensitivity on this issue, especially since—yikes—Al Jolson originally wanted to play Porgy and Gershwin himself seriously considered opera star Lawrence Tibbitt to play the role. Both would have tastelessly done so in blackface, still common practice in 1935. If blacks and whites attended the same theater at all at that time, which was rare, they were often still segregated. And this was a show about black life written by, well, white guys. Having African-Americans portray even the smallest roles in a show where perceived African-American culture is appropriated by persons of privilege becomes a form of affirmative-action art and an apologetic attempt to counteract the charge that “Porgy and Bess” remains a high-class, even if gloriously tune-filled, relic of the minstrel-show era.

A quick perusal of the program makes clear that with the exception of the costume designer, the only African-Americans involved in the production are onstage, not the creative team that actually calls the shots. And looking out at the audience during the first two performances makes clear the real cultural divide here: the performers and the audience are as different as night and day; with rare exceptions, black performing for white. Opera, that most Eurocentric, expensive, elitist—and yes, most white—of all art forms, is as far from Catfish Row as imaginable. Should we be similarly concerned, though, if next month’s production of “Madama Butterfly,” an opera stereotyping Japan written by an Italian, is not portrayed by an all-Japanese cast for Lyric’s mostly white audience?

Another cultural disconnect that is visible from the moment the curtain opens on Lyric’s “Porgy and Bess” is that of north vs. south, including the bizarre decisions to cut the entire introductory barrelhouse piano and chorus “Jasbo Brown Blues” scene-setting and Southern-tinged prologue, to eliminating the goat cart Porgy uses to travel around on along with the central references to it (Porgy drags himself around on a crutch that is broken at one point, but then miraculously reappears in one piece) and to censor any use whatsoever of the “n” word in a libretto drenched in it. This is a production that appears to be conceived by and executed by urban northerners who imagine South Carolina’s black south as looking like a Yankee ghetto, something so much out of “Dead End” that you expect the Bowery Boys to peer out from around a corner. If “the fish are jumpin’” and “the cotton is high,” it must be somewhere in the back alley.

Gershwin had the opportunity to premiere what he himself called a “folk opera” at the Metropolitan Opera, but was shrewd enough to realize that despite the greater legitimacy and the more vast resources of the Met over Broadway (his original full orchestration, which took nine months to complete, was greatly reduced and simplified for Broadway), his piece on “Negro life” would have more performances for a wider audience on the, well, Great White Way. He also became convinced as he began to see that there were indeed “people of color” who could actually sing and perform the roles that this would greatly add to the work’s “authenticity,” and that tradition remains mandated. It is worth noting that if this were not the case, there would be far more performances of the work and yes, profits for the Gershwin estate. Then, as now, the majority of black artists are not opera singers trained to sing in an opera house without amplification and, as such, few can be clearly heard and understood, which was certainly the case at Lyric, one of the world’s largest opera houses and more than three times the size of a typical Broadway theater. If it weren’t for Lyric’s supertitles, which have cleaned up much of Ira Gershwin’s often embarrassing use of pre-World War II Ebonics for better or worse, the audience would be lost without knowing the story.

There are two casts of the three principals for the Lyric production, and one performer, Lester Lynch, alternates between playing the role of Crown and Porgy. Gordon Hawkins, the “A”-cast Porgy, unfortunately, is badly miscast, as he neither looks nor acts the part as written nor is there enough pitch control or technique to sustain the work’s vocal demands. This becomes particularly problematic during the duets with the “A”-cast Bess, Morenike Fadayomi, who out-sings him note for note. The “B” cast, Lynch as Porgy and Lisa Daltirus as Bess, are far more convincing as a couple in terms of drama and music, and though Lynch is a high baritone rather than the bass-baritone needed to get the low and the high notes as written, he does a solid job by and large. Crown also lies low for him, but he makes such a superb brute and bully that he makes it work, as opposed to the “B” Crown, Terry Cook, who sings and plays the part far too wimpily and cannot carry off an admittedly larger Bess to be raped in the brush as Lynch does to chilling effect.

Jermaine Smith’s Sporting Life is a choreographic and devious delight, though hearing him was sometimes a struggle. No problem hearing Jonita Lattimore’s Serena, though, who stops the show cold with her rendition of “My Man’s Gone Now,” which also gives the chorus its most shining, gospel-filled moment.

When it comes to conducting “Porgy and Bess,” John DeMain, the guy who led the spectacular 1976 Houston Grand Opera production that became the complete work’s definitive recording and which went on to play Broadway and tour the world, is the conductor of choice. Though tempos were a bit tentative on opening night, already by the Sunday matinee that introduced the “B” cast, things were picking up.

One thing that becomes abundantly clear in the tardy Lyric Opera premiere of “Porgy and Bess,” which in the end, is an immensely enjoyable experience, warts and all, is that “Porgy and Bess” will continue to be performed in spite of itself, because of Gershwin’s undeniable genius and way with a tune. And with an African-American president-elect continuing to plan a new era across town, perhaps the real progress here is that “Porgy” has become irrelevant enough and safe enough to be able to be performed at Lyric Opera. 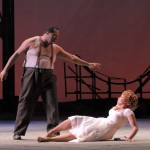 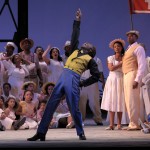 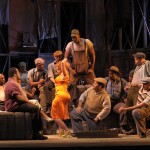