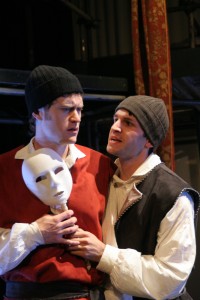 The high point of of Zeljko Djukic’s production takes place in its very first moments, when two suspicious Capulet servants circle one another ambivalently and vulnerably, creating a tension and hypersensitivity that could have set an exquisite emotional compass for the play, but unfortunately the aura evaporates almost immediately. Instead, the show feels increasingly less controlled and meaningful, as actors rush on and offstage with little palpable motivation and with a real sense of free-floating anxiety as they attempt to maintain one high note of emotional timbre. There are a few exceptions, notably Carolyn Hoerdmann’s refreshingly earthy Nurse and Peter DeFaria as a Friar Laurence who creates something close to a moral center of the play; but overall the actors seem antsy rather than commanding, leaning on or clinging awkwardly to the poles and scaffolding that comprise the set, so that the structure onstage ends up feeling less like a minimalist modernization of Elizabethan technical theater than a kind of cage or prison. To put it much more simply, the show seems to be stuck in the text rather than deploying or appropriating it. (Monica Westin)