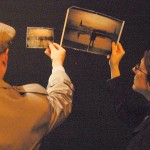 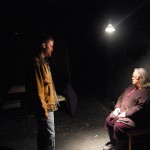 With three separate evenings running in repertory, each a collection of short plays of varying lengths thematically connected yet with mostly distinct creative teams and casts (uniformly solid), the side project has undertaken an especially ambitious challenge this fall. “Static/Cling”‘s subtitle, “Love, Abuse, Murder. Welcome to family life,” is an apt description for an interesting if depressing night of theater.  Daniel Talbott’s “What Happened When” kicks it all off on a very low key, as two brothers converse, quietly, in the middle of the night, when one awakens to the presence of his sibling in his room. As the ghostlike conversation unfolds, darker and darker secrets are told. Short plays afford the opportunity for experimentation, and here both playwright and director Anna C. Bahow seem to conspire to test the limits of somnolence, with long repetitive pauses, minimal movement and lines spoken at times so softly that they’re drowned out by audience coughs and a noisy HVAC in the theater’s intimate confines. The second play, Matthew Ira Swaye’s shorter “Moot,” is a pleasant palate cleanser, crisp and literary and mysterious, another two-hander in which a long-estranged brother and sister briefly reunite and discuss the mental torture of being raised by a teacher and a preacher. “frag,” by Michael John Garces, rounds out the night with a loud, rough and tumble tale of two brothers and their mother, acted out in numerous short scenes that seem to exemplify the series’ overarching theme of “To the Quick.” It’s the most fully realized of the three plays, and the longest, but its charms are most apparent in combination with “What Happened When.” Both plays feature certain thematic similarities: two brothers reminisce in scenes punctuated by the phrase, “remember when…”; in both, one brother is all libido, one brother no libido; in both, the crime of the parent punishes the child. And yet, for all their similarities, they couldn’t be more different in tone and pacing. And this ultimately is what’s most interesting about the evening: the whole is truly greater than any of its parts. (Brian Hieggelke)

“Static/Cling” runs at the side project, 1439 West Jarvis, on Wednesdays and Sundays through December 21.