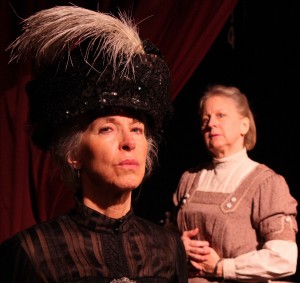 A perceptive, controlled and often tongue-in-cheek homage to murder-mystery great Mary Roberts Rinehart (who made “the butler did it” a household phrase), Cameron Feagin’s adaptation is directed ably by Terry McCabe. The production is anchored by Mary Poole’s watertight performance as Agnes, a droll would-be detective in great-aunt’s clothing who spends the summer in a creepy mansion belonging to a mysterious old aristocrat. The adaptation relies heavily on exposition, with numerous monologues performed in front of a curtain that opens and closes to cut from narrative to short action scenes, and because of the sheer time spent telling instead of showing, the show drags somewhat during the second act, which is comprised mostly of anticlimactic explanation with forays into unconvincing melodrama. But it still creates intelligent suspense and real fear remarkably well, with equally smart comic relief in the form of Agnes’ gloriously irrational Irish maid Maggie (Cameron Feagin); the show is self-conscious of its participation in both the murder mystery category as well as the contrived social conventions that genre seems to require. (Monica Westin)