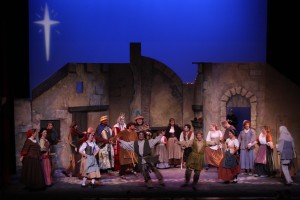 Gian Carlo Menotti’s television opera “Amahl & the Night Visitors” is a Baby Boomer holiday favorite which was first broadcast live on NBC on Christmas Eve 1951 to millions of viewers and was broadcast consecutively on the network every Christmas Eve through 1966, becoming one of the most performed live holiday shows of all time.

The composer himself told me of an unusual performance where he sat next to proud mother Jacqueline Kennedy as her children John-John and Caroline played shepherds in a production in Washington (“Caroline sporting a white beard”).

This one-act work (as in short for the attention-challenged) is one of those truly rare family works that is immediately accessible on every level—by both children and opera novices—and yet is still meaningful to the most seasoned opera-goers. As last year, Chamber Opera Chicago production will be directed by the composer’s son and former Chicagoan Francis Menotti and will be based on the 1951 original television production staging of his father with most of the same extraordinary cast from last year, including COC artistic director Barbara Landis as Amahl’s mother, Patrick Blackwell as Balthazar, Christopher Lorimer as Kaspar and Aaron Stegemöller as Melchior. The role of Amahl will be divided by a two newcomers and superb Amahl veteran Micahel Zajakowski Uhll (Dec. 7) for each performance and Victoria Bond will conduct. (Dennis Polkow)