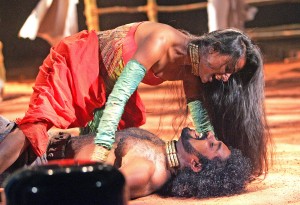 A pure spectacle of multicultural burlesque epic, but not usually in a good way. Visually gorgeous but fairly incoherent, the show’s biggest obstacle is that very little of it is actually comprehensible; instead, while many lines are in English, the actors speak in a number of languages that seem to reflect their ability to speak English rather than the importance of their words. For example, the actor playing Oberon doesn’t speak any English, which makes much of the plot hard to follow. In addition to the story getting lost, the acting takes a back seat as well, most of it quite weak except for Ajay Kumar as a charismatic Puck and Aporup Acharya as a Bottom who brings the only real element of real human character into the show. Director Tim Supple’s obvious Peter Brook influence doesn’t seem to be much updated, with drumming and sound that one might expect at a sort of “ethnic dancing/drumming” festival; and the show feels dated, all bright lights and flashy colors and excitement about the exotic without any critical element to it. It’s also immediately obvious that this production is something of a colonial enterprise rather than an independent theater company—in fact, Supple traveled for a year in India hand-picking actors for himself, a fact that sits uneasily over the show, which also moves much too slowly for all of the running and shrieking that happens onstage. The experience is of a colorful tornado of actors rolling on top of one another and climbing up and down ropes—but all this action doesn’t seem to really take us anywhere, especially when the lines recede into unintelligibilty. The ending borders on a love-fest, with actors singing, holding candles, and asking the audience to clap along with them, in a moment that would make Edward Said roll over in his grave; this is Orientalism at its most insidious.  (Monica Westin)