by Dennis Polkow
December 1, 2008Filed under: 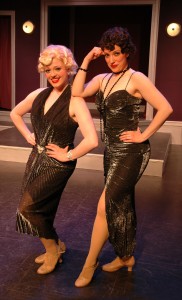 Those who associate “Gentlemen Prefer Blondes” with the Marilyn Monroe movie that director Howard Hawks made in 1953 and Monroe’s iconic rendering of “Diamonds Are a Girl’s Best Friend” that Madonna has been ripping off for decades now are in for a surprise. As wonderful and influential as that film is in and of itself, it takes its laughs and drama more seriously and sets aside most of the full-on comedy, dance and music of the 1949 musical comedy that made Carol Channing a star. Hawks cut most of the Jule Styne score (including the title track!) and ended up with such a truncated musical that additional Hoagy Carmichael songs were written for it. The 1949 play, the last and most popular in a long line of stage adaptations of the popular Anita Loos 1925 novel, is a different animal altogether. The opportunity to experience it on its own terms in this ultra-rare production by Circle Theatre would be reason enough not to miss it, but happily, there is much else to recommend this production.

The show’s biggest asset is Rachel Quinn as a stunning Lorelei Lee, the blonde flapper who has a penchant for rich men and expensive jewelry and never overplays the part of the “dumb blonde,” who despite thinking that Mr. Gideon wrote the books left in hotel rooms and, like a certain recent vice presidential candidate, has trouble distinguishing continents and countries. Quinn sings and dances superbly and while there are other cast members who can do one or the other with varying competence, most of the songs that need a strong voice have one, and most of the dance sequences that require dance chops have them.

Director and choreographer Kevin Bellie sometimes overplays movement on the cramped stage but manages to meet this material head on, recognizing it for what it is: a post-war 1940s attempt to recall the 1920s in a nostalgic way with the huge advantage that the 1920s were a far more fascinating time than say, the 1980s that fuels much current nostalgia. The “roaring twenties” and “jazz age” often make the 1960s look tame by comparison, well reflected in this show. Here, folks are pleased to be sailing to Europe “where the liquor is the Real McCoy” and to be constantly partying. Stocks are soaring, prosperity is rampart, and everyone is “keeping cool with Coolidge.” It’s a fun trip back and a sobering reminder that, as we know the bubble is about to burst and the Great Depression is just around the corner, the more things change, the more they stay the same. (Dennis Polkow)