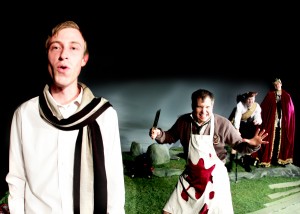 A humane and droll play about memory and loss, examining four quintessential adolescent-boy archetypes in a small town in Scotland. The story meanders between their 1980s boyhood and adult years in fleetingly short scenes that are sometimes rich with the transient nature of memory and sometimes just a bit underbaked. The plot is formulaic enough, with familiar characters challenging one another about a mysterious tragedy in the past and their own hypocrisies, and when the final revelations come as the boys, now grown men, betray one another angrily, one feels a slipping of the real genius of this show, which is watching all four delicately controlled actors maneuver with remarkable skill in portraying the characters from childhood to adulthood, with an especially nuanced performance from Dan Behrendt as the incorruptible protagonist. Director Carlo Lorenzo Garcia understands that their town is another silent character, and the presence of Girvan, Scotland hangs heavily over the play, where the show’s aesthetic of stylized cliffs, tiny school chairs, and an eighties indie rock soundtrack anchors the story and keeps it from drifting too far into the world of stereotype. (Monica Westin)