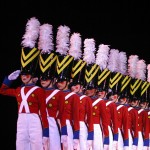 The good news is that the Radio City Christmas Spectacular is back this year a bit later than the past two years, when it was practically a Halloween show, but the bad news is that there is a shorter time window to actually catch it. This edition is being dubbed as the “10th annual” Chicago production, forgetting about the fact that the show actually did not run here for a couple of years and that it has never actually played within the city limits.

Since 2006, the show has been readjusted, and some of the newer stuff is really starting to wear thin, notably Santa pretending to pick an “audience member” with dance shoes who knows her mark to dance the Nutcracker with the dancing bears, and a really annoyingly shrill Mrs. Claus to whom Santa sings “What Are You Doing New Year’s Eve?” The tap dance “Twelve Days of Christmas” goes on forever and “Santa’s Gonna Rock and Roll” is lame. And yes, the canned music and tap track actually got slightly off from one another during this year’s opening; as great as this show is, it boggles the imagination to think of what would happen if a live orchestra were employed as it is in New York.

That said, there is still plenty of what everyone comes to this show for: legs, legs, legs, i.e., the Rockettes, that line of sleek, gorgeous women who dance and sing their hearts out in stunning, sexy costumes. I confess that no Christmas is complete for me until seeing the Rockettes kick up in those red-spangled Santa costumes out of a New York cab. Sarah Palin, eat your heart out.

And though I am starting to wonder about the ethics of keeping two camels, four sheep and a donkey penned up behind the theater for an admittedly impressive two-minute “walk on” during “The Living Nativity,” the finale gets me every time. (Dennis Polkow)