by Monica Westin
December 1, 2008Filed under: 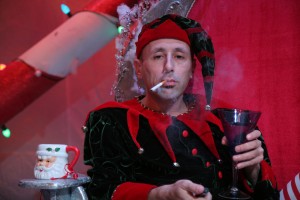 Its fifth year running, Theater Wit’s one-man adaptation by Joe Mantello of the classic David Sedaris tale is starting to wear a bit thin, but luckily the brilliance and durability of the humor in the writing carries through. Mitchell Fain, though charming, charismatic and graced with perfect timing, works a little too hard to convince the audience that he’s charming, charismatic and graced with perfect timing, splicing in innumerable asides to the audience and dirty jokes told over a martini glass that he occasionally thrusts towards the audience as a toast—the whole effect just feels a bit too forced and more like stand-up than a theatrical adaptation of an almost perfectly constructed and beautifully cynical radio essay. Still, Fain feels like your bitchy best friend, over-the-top and indulgently offensive, and some absolutely hilarious moments, such as his fantasy of Billie Holiday performing a burlesque “Away in a Manger” make “Santaland” worth seeing. (Monica Westin)