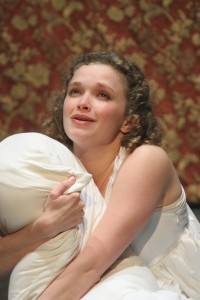 EDITOR’S NOTE: This a new version of the review of this play, based on the critic’s viewing of the second act. See this for the original and the comments that accompanied it.

Having now seen both halves, I still find that the high point of of Zeljko Djukic’s production takes place in its very first moments, when two suspicious Capulet servants circle one another ambivalently and vulnerably, creating a tension and hypersensitivity that could have set an exquisite emotional compass for the play, but unfortunately the aura evaporates almost immediately. Instead, the show feels increasingly less controlled and meaningful throughout the first act, as actors rush on and offstage with little palpable motivation and with a real sense of free-floating anxiety as they attempt to maintain one high note of emotional timbre. The second half suffers from the overzealous intensity of the first; when the real climaxes should occur, they feel curiously stilted, and the final scene, which is performed silently and with arresting visual effect, feels like the result of exhaustion and tacked on rather than in dialogue with the rest of the show. Romeo and Juliet come across as more childish than foolishly adolescent, with a Juliet who seems to be always on the verge of stamping her foot and whose most memorable gesture is curling up in her mother’s lap; during the lovers’ “morning-after” scene there’s no sense of motivation for their pairing, sexual or otherwise. With the exception of Carolyn Hoerdmann’s earthy Nurse and Peter DeFaria as a Friar Laurence who creates something close to a moral center of the play, the actors seem apprehensive rather than commanding, the show seems to be stuck in the text rather than deploying or appropriating it. And at the risk of sounding like a philistine, I might suggest that for a production that deliberately doesn’t try to do anything progressive, three hours plus is simply too much to ask of an audience.  (Monica Westin)