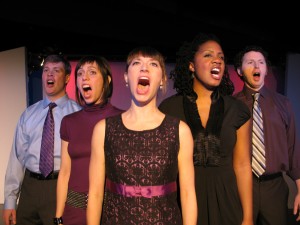 We’re all breathing different air these days, what with a disastrous economy and all hopes pinned on a shiny new president who seems awfully close to perfect. The cast of Second City e.t.c.’s thirty-seceond revue is clobbering these sentiments for all they’re worth.

Something about the show’s vibe, though, feels especially fresh and full of momentum. You won’t find one “Hey, Grandma” bit, no cocktail party or barbecue sketches, no dad uncomfortably talking about the facts of life with his kids. Not everything here centers on current events (and a couple sketches miss their mark), but I’d say ninety percent of the material has an original spin to it—either due to its construction or the performances themselves. An image of Cloud Gate makes up the set design—the cast is literally performing on top of the Bean, and the height suits them.

“Brother, Can you Spare Some Change” (directed by Bruce Pirrie) features one new cast member, Christina Anthony, and she is a major talent. It can take newbies a few months to figure out how to be themselves within the parameters of a Second City show—everything is polished and lively and very mainstream—but Anthony is confident right from the start and she is probably the most exciting addition to the e.t.c. stage since the arrival of Keegan-Michael Key so many years back.

She sings a song about bad luck in love, backed up by cast members Amada Blake Davis, amusingly pert and neurotic, and Laura Grey, an imp with huge eyes and an energy that stands out from the pack. But watch as Anthony slinks into the crowd and attempts to pick up an audience member, her seduction red hot and hilarious.

Timothy Edward Mason—who joined the cast last year and was somewhat muted—displays more of his specific comedic personality. The guy has the biggest smile on that stage, and he and Anthony have real chemistry in their scenes together. Mason has a twisted side, seen in full effect as he devolves into a sputtering weirdo, ending the scene with his hand down his pants—looking startled at his bizarre behavior but unable to stop it. Later, Mason turns a bedtime song for his daughter into a very funny bit by virtue of his delivery—earnestly dirty, you might call it.

There’s also a surprisingly funny opera about Mayor Daley sung in Italian (Adam Sandler used to do something similar on “Saturday Night Live,” but the high quality of the show puts you in a forgiving mood). In one of the strongest bits, Andy St. Clair takes the stage all by his lonesome, playing a Southern-fried defense attorney in the William Jennings Bryant mold, dabbing a folded hanky to his upper lip as he improvises with an audience member. It’s a very good showcase of St. Clair’s talents and ability to charm an audience.

Tom Flanigan is perhaps the quietest cast member, but his understated boy-man persona works. He is frequently the perplexed guy—but it’s a layered performance, somewhat dim, but not quite dumb.

This is a factor too important to be dismissed—without good acting, sketch is just a collection of potentially funny ideas. I’d say that potential has been reached this time out. I’ve been critical of Second City’s show in the past; they can feel like regurgitated clichés of themselves. “Brother, Can You Spare Some Change?” is unquestionably a Second City show, but an extremely good one at that. (Nina Metz)