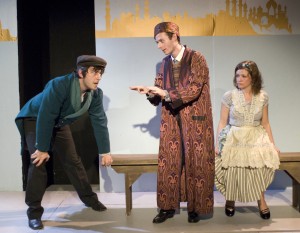 RECOMMENDED
A show that understands that language and love are just games we play, however seriously we take them. Director Libby Ford plays with us by presenting three farcical scenes tracing the stages of marriage, framed by the truly moving and poignant romance “Lady with a Lapdog,” so that the show ostensibly refuses to take humankind’s drama seriously but leaves a slight “what if” quality to that refusal. The three stories, respectively about a ridiculous and petty courtship, the unbearable life of a commuting family man and the monologue of an old man beaten down by a tyrannical wife, point sometimes a little obviously at the absurd and disheartening monotony and predictability of love and social life, but by placing “Lady with a Lapdog” at the center, the show frames all human encounters as kinds of illicit affairs, heightening the rest of the material. The acting isn’t always as controlled as it should be, sometimes approaching the mania of an improvised skit that’s gone on too long, but the overall effect is substantial and thoughtful. Chorus repetition during transitions feel repetitive during the show but reach a surprising cohesion and new meaning by the end of the show, which at the very least is proof that you can produce a show that’s both light and eloquent. (Monica Westin)