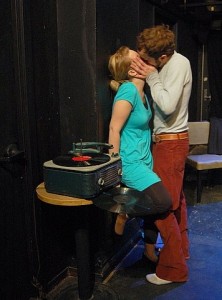 One of the most cohesive groups of ten-minute plays I’ve seen, with a thoughtful transition from exploration of romance to war so nuanced that the change of themes is almost imperceptible. The strongest of the plays are stunning, especially the first, “78,” in which a couple lives a lifetime together in a single, repeated day; “Yes to Everything,” a vague but compelling monologue about being stuck in love, unable to move on, that cleverly appropriates stand-up conventions, camera phones and Dictaphones as instruments of paralysis; and Brett Neveau’s chilling and subtle “Ethnic Cleansing Day” that stages a creepy rhetoric of silence about hate crimes in a very recognizable family. The plays aren’t all consistently effective, of course, but the range of quality is less dramatic than in most groupings of short plays, and there’s a well-chosen variety of formats as well as ideas so that visually and theatrically the series remains dynamic and creative. (Monica Westin)