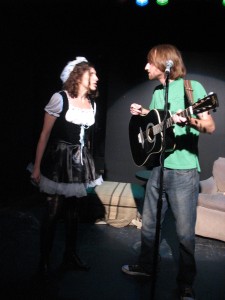 It’s hard to trace a coherent thread between these four short plays; Adam Webster, the curator of the “Cut to the Quick” festival, in which this series participates, argues that they share a common concern with the ways that we skew our perception of the world, but their strongest commonality seems to be a vague exploration of excess: in violence, confession and socially tabooed language and subjects. This isn’t to say that the show is always offensive, but it’s often hard to know how to take the plays; for example, in “Three Hymns of Apathy,” a couple perform alternating and hyperbolically dramatic monologues about terrible events in their past, centering somewhat vaguely around the crumbling of their relationship and September 11th, seeming to border on parody at moments (for example, what do we make of lines like “I was five years old for fuck’s sake! Why did he show me that dying pigeon?!”) but inconsistently so. “Dead Weight” marks the high point of the night, with Rebecca Buller and Catherine Price as hilarious and beautifully controlled cold-blooded teenagers who crack racial jokes as a war rages outside, but the rhetorical ends of the juxtaposition are unclear. “Little Green Man,” ostensibly about an alien held captive and forced to learn American culture from TV, has great potential that doesn’t quite pan out; and “Autophagy” fulfills the hipster-mocking and android quota of the evening in a well-timed and funny but fairly incoherent final show. Ultimately, an intense but uneven and confusing evening. (Monica Westin)