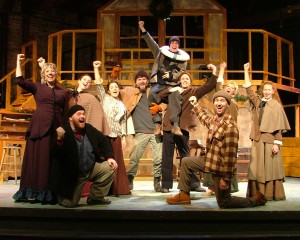 Workshopped at Northwestern in 1993, premiered at Bailiwick in 1995 and performed as an annual holiday tradition there until 2006, “The Christmas Schooner” has had more than a hundred productions across the country and abroad. Bailiwick had announced 2006 as the work’s final voyage for the company but is presenting the piece as a bittersweet swansong to its Belmont Avenue home with all of the trimmings, including a five-piece orchestra and new direction by Mary Beidler Gearen.

I had never seen a single production of this work at Bailiwick nor anywhere else, nor did the idea of a musical about transporting Christmas trees particularly entice me. “What is at stake?” as a colleague of mine always likes to ask in discussing shows. Well, quite a bit, as it turns out—the traditions and values that make us who we are. The songs do a wonderful job of conveying the emotions that the story needs to communicate and of giving us a sense of what a Chicago Christmas was like more than a century ago.

It’s so ironic that in a year where we are still debating having a smaller tabletop tree vs. the full boat experience, if you’ll forgive the pun, the presence of a nineteenth-century-style tree on stage with fruit and nuts as decorations along with the descriptions of the “magic” of a traditional Christmas tree becomes quite enticing. Long before electric lights, plastic Santas, balloon globes and the myriads of Christmas kitsch that make up the retail-centered holiday season as it exists today that climaxes well before Christmas itself, European immigrants of a century ago had only the Christmas tree as the focal point of their celebrations, mesmerizing all who experienced it. Advent was dark and dreary, but when Christmas Eve arrived and though Epiphany, January 6, or the Twelfth Day of Christmas, the Christmas tree warmed hearts at the darkest and coldest point of the year. Up north, as in Michigan, that is not a problem, but when a Chicago cousin writes to her Michigan relatives who are sailors by trade that “there are so many people, so few evergreens” in the city after sharing her searing memories of childhood Christmas trees back home in Germany, the family decides to make one last late November journey of the season. Three generations of the Stossel family all end up deeply impacted by these annual journeys to Clark Street harbor, where not only Germans but immigrants of varied backgrounds end up lining up to get the best pick of the trees.

Ultimately, this becomes a family love story crisscrossing generations as well as a tale of duty and honor and maintaining sea traditions as well as Christmas traditions, passing on what we have been given and as “Opa” (Jim Sherman) observes, that “If we accept our blessings, we accept our pain as well.” Tying up such a message in a Christmas package filled with music makes it all the more palatable, but no less important. (Dennis Polkow)