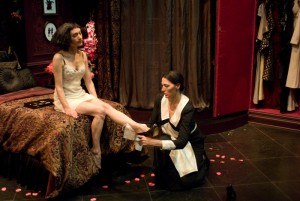 It was all too easy to identify with a pair of homicidal housemaids but such was the power of Writers’ Theatre’s riveting revival of Jean Genet’s “The Maids” (1947) that when two sister-servants laced their insensitive mistress’ cup of chamomile tea with barbiturates, I was ready to run onstage and serve her the drink myself! I suppose one can blame these tough economic times. After all, in November Crain’s Chicago Business published an article, derided by several readers in the weeks that followed, about how some Kenilworth residents were coping. Sure, you might be laid-off, lose your home and see your retirement savings disappear, but isn’t it reassuring to know that you’re not alone and that in Kenilworth some have had to scale back on the cleaning-lady visits, nix the private French lessons and “downgrade” to $500 winter coats? Tragic, indeed. I hope they’re being nice to their servants when requesting their nightly cup of tea.

Jean Genet, of course, was the poet laureate of the truly poor and oppressed and “The Maids” was his theatrical exploration of the power struggle between the haves and the have-nots—always raging, constantly shifting and all consuming. The play is challenging, to say the least. There is little in the way of action save for some ritualized role-playing such as when the maids try on their lady’s clothes and jewelry and recreate their mistress’ patronizing and humiliating verbal tirades. Emotions and feelings explode but don’t always seem to be motivated. And the psychology of the sisters—stubborn Solange and delicate Claire—demands that a performer vacillate between desperation and liberation.

Given Writers’ recent output, it’s not surprising that this revival has met all these challenges and surpassed them to amass a production of considerable intellect and artistry: director Jimmy McDermott’s staging is the epitome of finesse; Elizabeth Laidlaw’s Solange, Helen Sadler’s Claire and Niki Lindren’s Madame offer performances of psychological precision; and the design team has transformed the intimate, fifty-seat Books on Vernon venue into a gorgeous and claustrophobic French boudoir setting replete with ornate floral prints, black crystal lamps and pink velvet walls.

These qualities would make any production worthy of professional admiration. What makes McDermott’s worthy of excitement is how much passion it ultimately oozes. From the crime passionnel of its story to a passion for subversivness—McDermott admirably doesn’t shy away from Genet’s hints at incestuous lesbianism—I doubt you’ll see a finer or more resonant production of “The Maids” in the Chicago area for some time to come. (Fabrizio O. Almeida)