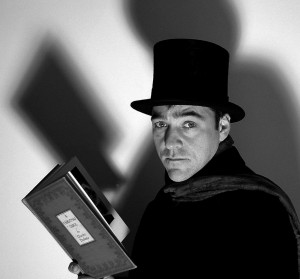 Michael Halberstam as Scrooge at Writers

When Charles Dickens wrote “A Christmas Carol” back in 1843, he reportedly did it merely to pay off a debt.  His “little Christmas book,” as he liked to describe it, became the first in series of six Christmas books, but none ever attained the same popularity as that first effort.  A less clever man might have been annoyed by the success of what he clearly considered a lesser work, but not Dickens.  He was enough of a populist to recognize, as Jean-Paul Sartre would later explicitly state it, that the public always completes every work of art.  So unlike Tchaikovsky, who had nightmares about the fact that he would be best remembered for the “1812” Overture and “The Nutcracker,” Dickens shrewdly saw the dramatic and commercial opportunities for “A Christmas Carol” early on.  Nine years after writing it, Dickens read the novella publicly to a literary society in Birmingham and three days later to a working-class audience.  Both groups were mesmerized, according to newspaper accounts.

That same tradition continued on with stage actors for decades well into the radio era although, curiously, the thought of actually dramatizing the story gained more popularity when silent movies came in, allowing for dissolves and such that could make the ghosts described in the story actually appear via camera tricks.  In the case of the Goodman Theatre, one of the oldest attempts to literalize the story on a live stage, the earliest adaptation thirty-one years ago opened with Dickens himself writing the story on stage at his desk with a quill pen and serving as a pseudo-narrator, although he became gradually less relevant as the action progressed.  Much was made about the first time that various ghosts took flight on stage in the early 1980s, and long before falling chandeliers and helicopter landings became commonplace in mega-musicals of the later 1980s, plenty of folks were coming to the Goodman “A Christmas Carol” for the stagecraft more than the story.  There were times when the production became so behemoth and so stripped to the bone narratively that Dickens seemed to fade away from the proceedings almost as mysteriously as Marley’s face on Scrooge’s knocker.

In this year’s production, a small Greek chorus of jovial carolers endeavor to tell the story, right from “Marley is dead” and like that first Goodman adaptation some three decades ago, they fade away from the proceedings but do appear now and then when a jolt of Dickensian language is needed.  After all, when the narrative is stripped bare apart from its social commentary and wry humor and eloquent storytelling, even Mister Magoo can play Ebenezer Scrooge. 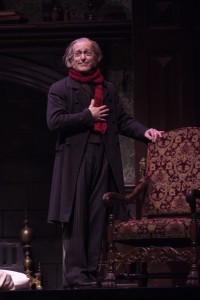 The problem that poor Larry Yando, a terrifically talented actor who is playing Goodman’s Scrooge for a second year, has is to flesh out a character via dialogue that does not benefit from Dickens’ own insertive language.  Invariably, this means that Yando, like most Scrooge portrayals, ends up coming across at the beginning more cranky and mean than the book and more joyous and childlike in the end as a literal contrast has to be drawn.

The huge advantage that Michael Halberstam has in his solo performance of “A Christmas Carol” at Writers’ Theatre is that his own portrayal of Scrooge can be far more subtle because he can play up Dickens’ own descriptions.  His Scrooge is more indifferent than mean, very matter of fact.  I haven’t heard the recordings of our state’s governor, for instance, allegedly refusing to pay children’s hospital funds without a kickback, but I would be quite surprised if he were hissing or screaming as he is doing so.  Usually such “requests” are calm and cool.  People can often be polite when they utter the casually brutal equivalent of “Are there no prisons?  Are there no workhouses?”  If Scrooge is angry, he is less interesting.  It is indifference that is responsible for his isolation, not a temper.

By the same time, the transformation that Scrooge goes through during “A Christmas Carol” is one of self-discovery through his life’s journey.  We see him become indifferent when his father leaves him at school over the holidays because the alternative is to fall apart.  As an older man, he can recognize the cruelty of this in a way that psychological self-defense would never permit when he is a teenager.  Scrooge has become his father in his dealings with his clerk and others, but only by recalling the pain that the indifference of his father towards him does he come to see this.  And so it goes, encounter by encounter, Scrooge even assuming that the point of his visitations is for self improvement, which is why he cannot bring himself to even consider the possibility that the first death portrayed during the Ghost of Christmas Future visitation could be his own.

The other detail made so clear in Halberstam’s performance that is lost at Goodman is that Scrooge has learned to stop feeling much of anything at all, good or bad.  So when he does start to feel some things once again with the Spirits, he wants to dismiss these in Dickens’ language.  And he cynically jokes with the ghosts as much as he is afraid of them, realizing it could be indigestion, or even senility, since these visitations were supposed to happen over three nights so he could have well missed Christmas entirely.

And what of the transformation at the end?  How radical is it?  Dickens gives Scrooge enough of a heart at the beginning—after all, the clerk does end up with the day off—and enough impatience at the end as he is watching himself try to be polite to a boy that he condescendingly finds can actually converse and quip, that there is more ambiguity here than Goodman or other literal adaptations can allow.

Halberstam and Writers Theatre are on to something very important in their rediscovery of “A Christmas Carol” as a solo performance work: the power of great storytelling itself in communicating the soul of a story vs. stringing together a host of scenes portrayed literally and hoping that the end result will be more than the sum of its parts.

This difference can best be seen in the response of young children to both approaches: children love Goodman’s “A Christmas Carol,” perhaps especially the “scary” parts, much like an amusement-park ride.  And adults love to bring children to watch them watch the experience.  The few young children who were brought to Writers’ Theatre “A Christmas Carol” however, barely made it through the first scene.  Some were just bored, to be sure, but others were struck down with primordial terror by the intensity and power of a single storyteller baring and focusing his all.  Children tend to have far more developed imaginations than most of us do as we get older, and Dickens’ eloquence is such that each of us in our own way conjures up in our mind’s eye something far more terrifying than anything the most literal staging of “A Christmas Carol” could possibly convey.