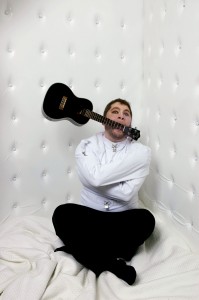 One of the novelties of being in a gay comedy rock band is that it immediately makes you one of the founders of gay comedy rock, so it would be apt to call New York City stand-up comedian Ben Lerman (of the now-defunct gay-rockin’ The Isotoners) the “Paul McCartney of homosexual comedy rock.” Three years removed from the Isotoners stint, Lerman’s stand-up routines are ukulele and absurdist-driven, having penned several goofy little folk songs about being attracted to Anderson Cooper (to the tune of Elvis Costello’s “Alison”), wanting an Asian baby for Christmas, and the sexual female encounters that led him to homosexuality (an Ace of Base parody called “(I Saw) Vagine”). At best, he can twist irony and satire around a melodic punch line, and at worst, he’s sort of a cooler, more homosexual-centered version of “Weird Al” Yankovic. Listen to his last record “Ukulear Winter” on his Web site for free to get a better idea of what you’re in for. (Andy Seifert)