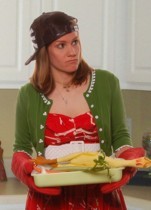 “You guys like bangs humor?” Cameron Esposito asks her audience in the midst of ripping off joke after joke about the joys of her new bangs-centered hairstyle and bangs-centered lifestyle. It’s a bit of a microcosm of Esposito’s entire act, which seems to accomplish two things: fool around with the seemingly trivial tidbits of life (like bangs, or singing the “Chip ‘n Dale Rescue Rangers” theme song in the shower); and use little, chuckle-worthy punch lines to build up to one killer joke that ought to bring the house down (In this case, the openly gay comedian recalls when someone asked what consisted of her workout regiment: “I said, ‘nothing really,’ and then I thought about it. ‘Oh yeah, it’s banging chicks.’”). While it’s not her entire routine, her sexual orientation (and how she’s amused with people’s reaction to it) does come up through her set. “‘I just want you to protect yourself so you don’t get AIDS’” her dad once told her. “Which is super relevant to me as a gay man living in 1985.” (Andy Seifert)