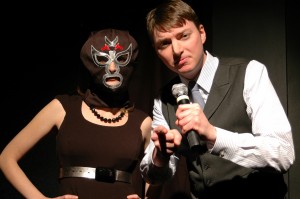 The short version of this review: If you’re planning to see one show at Second City, bypass the mainstage.

In fact the two shows currently running at Second City—“America: All Better” on the mainstage and “Brother, Can You Spare Some Change?” on the e.t.c. stage (see my review here)—are a case study in comedy formatics. In other words, the format of each show is the same but the results lie on opposite ends of the spectrum.

Break down most sketch comedy at Second City and what you’ll find is an initial premise repeated over and over. The joke is not really advanced or deconstructed or developed. The trick is to keep the audience engaged anyway, and the folks over at e.t.c. do this with considerable ease. It takes inspired ideas to make such a gambit work.

Alas, the same cannot be said of the 96th revue on the mainstage. Hell, just look at the title—call your show “America: All Better!” and you’re just advertising a lack of wit and better instincts.

Three new cast members join the ensemble, with Lauren Ash as the standout. She brings to mind the loud sarcastic girl at the pep rally, and she’s a natural fit here. Tellingly, she doesn’t have to fight (i.e. resort to overblown performances) to be noticed. (Veteran Emily Wilson, on the other hand, does an awful lot of screaming with very little payoff.) In a sketch where Ash could easily be the harpy—complaining about her boyfriend’s emotional reticence—she is funny, but she also taps into something authentic: frustration and hurt.

Anthony LeBlanc (also new) needs to create more of a defined presence for himself, though his song about interracial love (sung to a white women in the front row) contains priceless, tasteless lyrics, including: “I want to plow your snow.”  Clever raunch is a delicate thing, and LeBlanc has a knack for it.

Michael Patrick O’Brien is new to the mainstage, as well. Over the summer I went nuts for his Andy Kaufmanesque solo show called “Shatter” (when he was billed merely as “Pat O’Brien”). His strength as a performer is that you’re never sure if he’s fucking with you—this comes to the fore just once in the show, when his “love life” takes center stage.

It’s a good bit, and I wish there were more of them. The best sketch features Shelly Gossman as a Russian gymnast performing a balance beam routine on the rail separating the front of the house from the back. Stepping over drinks (and imbibing them at various points), she is accompanied by her effusively bearded coach (a very funny Brad Morris) and color commentary provided by O’Brien and Joe Canale. It’s the one bit that feels absolutely right. It’s a surprise and it manages to be both lightly transgressive (I’ve never seen any Second City cast member venture this deep into audience territory) and strangely hilarious.

Ultimately, though, there is something missing in the creative drive. (Matt Hovde is the show’s director). If “Impress These Apes” has shown us anything, it’s that funny people—given the right motivation and freedom to play—will generate unique and indelible material. Second City can’t accommodate the freeform structure of “Apes” (nor should it) but I think there’s a lesson in there somewhere. Second City has always had impeccable taste when it comes to hiring talent, but shows like this suggest there has to be a better way to take advantage of what these folks have to offer.

“America: All Better” certainly has enough good actors in it—I’ve come to really appreciate what Brad Morris is doing as a performer—and it’s not quite a colossal failure. Then again, it is so mediocre as to be insignificant. (Nina Metz)