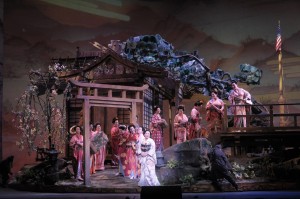 I haven’t done the math, but there have been probably more performances of Puccini’s “Madama Butterfly” at Lyric Opera than any other opera. Most famously, Maria Callas did her only staged performances of the role here at Lyric in the early years of the company. During the Ardis Krainik years, ticket sales of “Butterfly” were so assured that the role became a retreat for haggard divas.

Kudos to Bill Mason for having enough respect for the work to realize that if you are going to do it, at least this time around, do it right. I lost count of how many times we have sat through the Hal Prince production created here in 1982, and even Prince has long ago stopped bothering to stage it, sending Vincent Liotta instead the last three times, all with mediocre singers.

Soprano Patricia Racette has made Butterfly her own in recent years, giving us a preview of what to expect in a concert version at Ravinia two seasons ago where her co-star, tenor Frank Lopardo, was a no-show. Lopardo made it this time around, and the pair managed to bring considerable credibility to the usually far-fetched melodrama. True, Racette’s voice has its problems at this stage of her career, and Butterfly’s entrance was plowed through like a bull in a china shop; as at Ravinia, she wisely chose not to take the high note. But once over the bridge, the opera was all hers and she was able to match every note with drama to spare. And though we have heard more beautiful love duets, what lingers in this production is how much Racette and Lopardo really seem to be feeling for one another as the sliding door slowly ends Act I for their honeymoon.

Once you actually buy that such a deep connection is made between the two, then Pinkerton’s abandonment of Butterfly and her standing by him against her villagers sets up the tragedy of her suicide in a far more profound way. I cannot remember the last Butterfly where I actually shed tears at the end, but things click so well here, it would be a challenge not to do so. Some of the supporting roles are a disappointment (neither Suzuki nor Sharpless could be adequately heard in their duets and both roles were laying too low for the singers) but Sir Andrew Davis does a magnificent job of revealing Puccini’s score in all of its many colors. (Dennis Polkow)