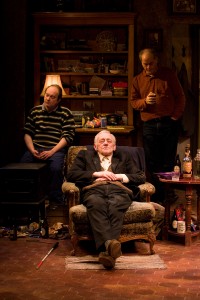 Booze and religion have always made strange bedfellows. In Christianity, you have a founder who goes to a party and changes water into wine, and reportedly not the cheap stuff, either. Even the gospels have Jesus being directly accused of being a glutton and a drunkard by his detractors. And that was in a sunny, warm and dry country. In an Irish winter, where the long, cold dark nights howl and days are gray and short, drinking becomes a national pastime. Add Christmas into the mix, and well, you get the idea.

In Conor McPherson’s “The Seafarer,” five guys are sitting around and drinking on Christmas Eve having the same kind of dull and meaningless conversations that come up when that happens (if this all sounds familiar, much the same scenario—right down to a dilapidated drunk Christmas in Dublin—occurs in McPherson’s “A Dublin Carol,” which Steppenwolf is presenting upstairs concurrently with McPherson’s “The Seafarer”). One of the guys, however, reveals himself as the Devil to one of the characters in a private moment, and lets the guy know that he would be in hell right now if he hadn’t been able to beat the Devil at a card game when they were in jail together years ago. They’ll be playing again tonight, but the results will be different and the two will enter the netherworld through a hole in the wall. Of course, this all seems quite reasonable when you’re drunk, but the problem for an audience that is sober is how literally this all appears to go down, making you think that you’re suddenly spending the holidays with Mel Gibson.

For my taste, McPherson wants to have the sophistication and metaphor of “The Seventh Seal” with the religious sensibility of “The Omen,” but like booze and religion, these make for strange companions. Perhaps when the brain is booze-soaked, people need more radical wake-up calls, and for those of a fundamentalist disposition who like to get drunk, this is your holiday play. For the rest of us, thankfully, there is enough of McPherson’s eloquent writing and a first-class Steppenwolf ensemble who act the shit out of this material—including Steppenwolf founding member John Mahoney back at the company—enough to make this a worthwhile experience, even sober. (Dennis Polkow)