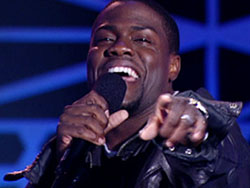 The first thing you will notice about Kevin Hart is that he’s comically short and knows it. His upcoming album uses its title, “I’m a Grown Little Man, ” to get the amusement from his five-foot, four-inch height out of the way so that he can use the rest of the time ripping through other, non-short people jokes (though he does say he yearns to have a son he can name “Lil’ Kev,” just so people will call him “Big Kev”). Animated, fiery and oftentimes hilariously argumentative in a harmless sort of way, Hart’s always moving, screaming, shrieking and convulsing if it means a laugh. Theatrics, though, aren’t the meat of his act. Hart’s mostly a substance-first, style-second kind of a comic, even if the substance is about things like fat-ass toddlers. “I saw this lady like three weeks ago; this lady had one of the fattest asses I’ve ever seen in my life,” he says. “She was like three or four years old. … I ain’t never seen a Pamper like that. Huggies don’t make those.”