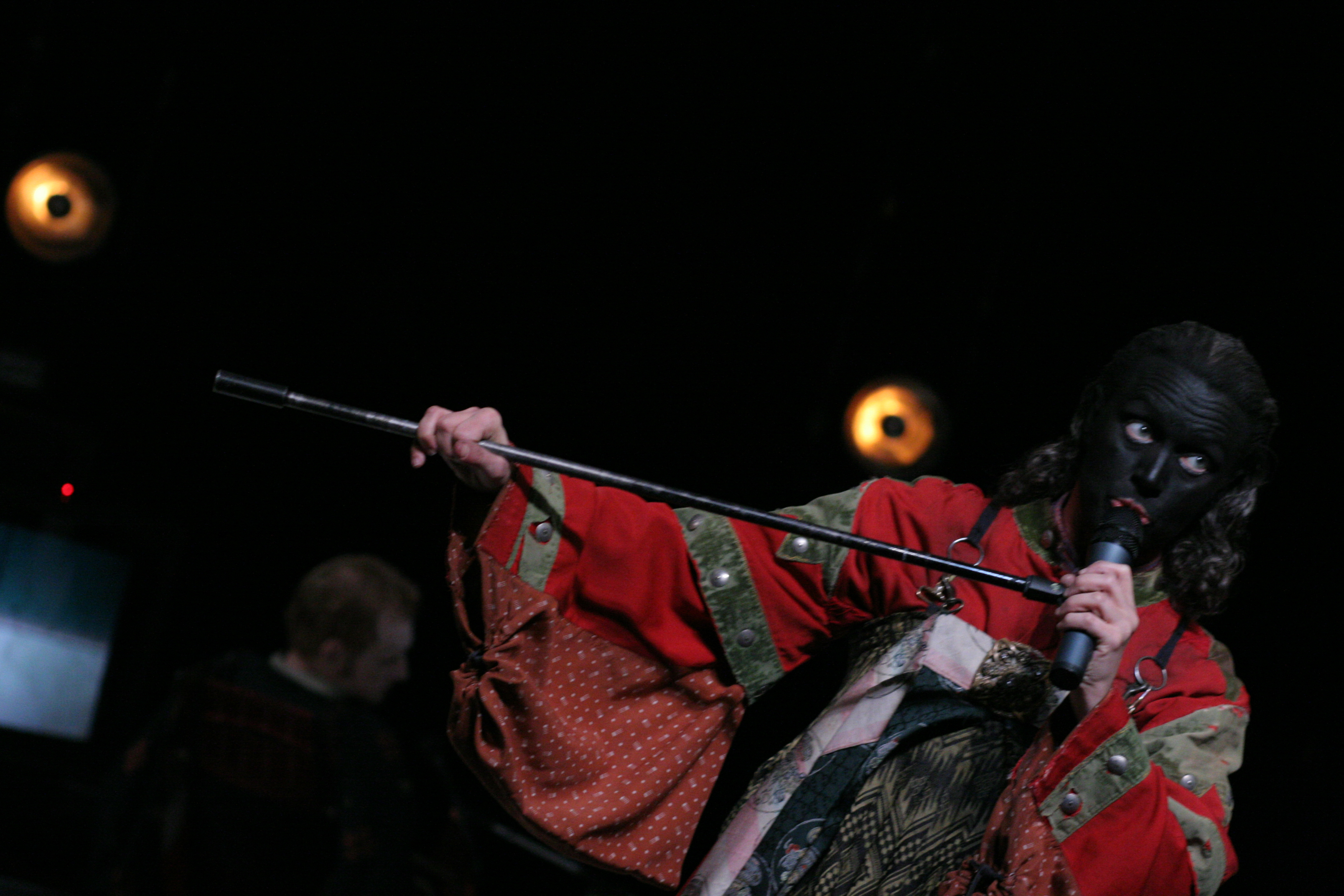 It was 1920 when Eugene O’Neill was awarded his first Pulitzer Prize for “Beyond the Horizon,” forecasting his place in theater history as one of America’s most important playwrights. Nearly a hundred years later, Chicago’s Goodman Theatre honors and examines the legacy of the “father of American drama” with “A GLOBAL EXPLORATION: Eugene O’Neill in the 21st Century,” a three-month festival (curated by Artistic Director Robert Falls) showcasing productions by some of today’s most innovative and exciting theater companies. At the top of the lineup is the New York City-based Wooster Group, itself a legend of the contemporary American stage, presenting their groundbreaking interpretation of “The Emperor Jones.”

For over three decades, under the direction of Elizabeth LeCompte, the company has been constructing its powerfully unique multimedia performances, including radical reworkings of plays by some of the most lauded playwrights of the historical and contemporary canon: Shakespeare, Tennessee Williams, Arthur Miller, Eugene O’Neill. Their highly stylized productions have earned critical acclaim and drawn passionate controversy, perhaps none more so than “Jones,” the rarely produced, controversial, expressionistic tale of Brutus Jones, the tyrannical emperor of an island in the West Indies, on the run from natives in revolt, haunted by the ghosts of both his criminal past and the scars of America’s nefarious racial history. The nucleus of the Group’s explosive production, which premiered in 1993, is Kate Valk, a white woman who takes the stage with her face caked in thick black makeup, assuming the title role. It is a performance that has been praised by critics as “riveting, haunting and altogether astonishing,” a “tour de force” that has challenged racial and gender stereotypes while dazzling, disturbing and defying expectations of audiences around the globe.

Valk’s relationship with O’Neill’s play goes back to her childhood: “I certainly grew up with [it]…Paul Robeson [the stage and screen legend who played Jones in the 1924 revival] was one of my idols and I had seen the film…I had even, as a young girl, seen a ballet version of ‘The Emperor Jones’ so I certainly knew about it, although I hadn’t ever read the actual play.” It wasn’t until much later that Valk encountered the play on the page, when LeCompte presented the idea of producing the play to the Group. “When I first started working with the company they were doing ‘Port Judith,’ and Spalding’s [Gray] party piece was kind of a mad dance… he and Liz had taken and edited a section from ‘Long Day’s Journey into Night,’ so O’Neill was around…we read [‘Jones’], and she [LeCompte] thought that I could play it.”

The Wooster Group’s process draws from a variety of sources—music, film, traditional global theater practices, pop culture—and for this production, the company found a great deal of inspiration in the presentational style of Japanese Noh theater. “We began working with the text from O’Neill and the movement that we loved from the Asian theater forms—not that we studied it at all, it was more a kind of very modern, fast synthesis of all those materials, but it came very intuitively. And it’s all there on the page, like music… It’s written phonetically.”

And on a first reading, O’Neill’s writing style is nearly as startling in its appearance on the page as the story itself—the diction and language immediately and disturbingly evoke the ghosts of American minstrelsy characters. Confronted with the apparition of a prison guard he killed before fleeing to the island, Jones cries out to the dark walls of the surrounding forest “I kills you, you white debil, if it’s de last thing I evah does! Ghost or debil, I kill you agin!” Valk’s Brutus Jones is presented with such magnetic and unrelenting precision that each performance, she admits, is extremely exhausting, and preparing for each remount of the show is a challenge to both mind and body for this seasoned and accomplished actress. “I don’t quite have the same energy I had when I was 35,” Valk says with a chuckle, “but maybe there’s something else I look for. I would say what I lose in youthful robustness I maybe make up for just by experience of all the other kind of performance I’ve done with Liz and the group since then. [The performance] takes a lot of energy and I was a little worried about that until… Scott [Shepard] and Ari [Fliakos], the people that I play with on stage, and I just watched the tape. I’m really looking forward to doing it again.”

Those recordings of past performances are invaluable tools for the Group when remounting works from their thirty-plus year history. “We just watched the tape of the last time we performed it, in Philadelphia a little over a year ago. It’s scored out, and it doesn’t change radically in terms of structure. The singing of the song, of the text, my style, is still very much the same.” But this tour of “Jones” will be the company’s last, says Valk, explaining simply that “there are certain roles you play at certain times of your life.”

But Valk seems more than pleased at the prospect of launching the first of the final performances here in Chicago, a fitting culmination of the fifteen-year journey of “Jones.” “It’s an honor to be part of the O’Neill festival—are you kidding? To have the work seen in that context, I’m thrilled. To be considered part of the modern canon of O’Neill’s work, I’m deeply honored.”

Please note the two free events being presented in conjunction with “The Emperor Jones.” Call the Goodman Theatre box office to reserve your seat: Performing Other: Constructing Race and Gender Onstage and Off Wednesday, January 7 at 5:30pm Claudia Cassidy Theater, Chicago Cultural Center, 78 E. Washington Blvd. What is the performative nature of race? How do we learn to read gender in an increasingly androgynous society? Join performance artist Holly Hughes along with panelists Romi Crawford, School of the Art Institute; Tanya Saracho, playwright and co-founder of Teatro Luna; and E. Patrick Johnson, Chair of Performance Studies at Northwestern… Read more »