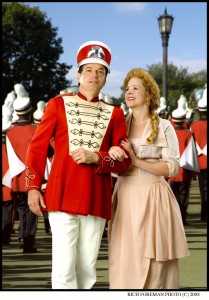 RECOMMENDED
A onetime flute player for John Philip Sousa and Arturo Toscanini who went on to write operas, symphonies, band music, standards and score radio programs, Meredith Wilson is best remembered these days for his 1957 show “The Music Man.” Inspired by his small-town boyhood in early twentieth-century rural Iowa, Wilson worked on “The Music Man” for eight years and wrote over forty songs for it, less than half of which made it into the show itself. One of these, “Till There Was You,” was the only cover song from a musical ever recorded by the Beatles and became a huge hit for the Fab Four in 1964, having been the second song that the group performed on its initial Ed Sullivan appearance that launched the British Invasion.

Ever since its inception, the role of conman and would-be boys’ band director “Professor” Harold Hill has been the domain of actors rather than singers, with the main musical qualification being the ability to crisply articulate or “speak” most of the sung sections with precise and punchy rhythmic syncopation. That Light Opera Works chose a singer, Larry Adams, to play the role suggested the intriguing possibility that the usually spoken sections of the songs might actually be sung, but Adams flabbily speaks his way through most of the songs yet does not have the acting chops to credibly seduce even the town librarian, let alone the entire town. Marian the librarian has the best singing moments, and Alicia Berneche tosses these off with such flair and style that in this production, it is she, not Hill, who comes off as the charismatic and colorful one of the pair and he, the dullard in need of a makeover.

Thankfully, there is enough else right in this production and full-blown, uncut revivals of the show are rare enough to make seeing this elaborate staging well worthwhile. The townspeople character parts are a hoot, particularly Jo Ann Minds as the eccentric mayor’s wife and Barbara Clear as Marian’s mother, who nearly stole the show at the opening. And with a full orchestra and Kevin Bellie’s imaginative and energetic choreography—some of the best seen at Light Opera Works—along with wonderful performances of Wilson’s score and remarkable counterpoint that, for instance, musically layers cackling gossips with smooth as silk barbershop quartet music, the experience is a welcome and timely look back while we pause to look ahead. (Dennis Polkow)