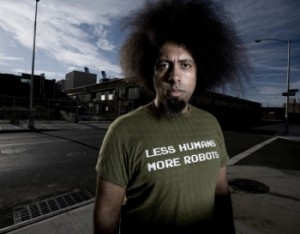 Sporting a giant, nasty afro and a t-shirt that says “Less Humans More Robots,” an audience member could suspect that 2006 Andy Kaufman award-winner Reggie Watts is about to push the limits of avant-garde comedy—in reality, he’s probably about to push the limits of his vocal chords. While primarily considered more of a “performer” than a “stand-up comedian,” Watts does delve into a bit of dialogue and absurdist punch lines; one story, about pushing his grandfather off a balcony and to his death, ends with Watts saying his grandfather, “didn’t make a sound, which showed his commitment to silence.” But Watts’ best attribute is one killer set of pipes, boasting a vocal range of ten octaves (we’ll assume some hyperbole involved) and the ability to imitate a whole slew of instruments and sound effects, making him like a more likable version of that “Larvell ‘Motor Mouth’ Jones” character from “Police Academy.” Many of Watts’ jams—often performed live through layering loops of his vocal beatboxes and basslines—fall comfortably in the “just really damn impressive” category, even with little or no actual jokes involved. But when the comedy does come paired with Watts’ bewilderingly high musical talent, it’s just that more effective. Watch his CollegeHumor.com video “What About Blowjobs?” to see the most impressive performance of the lyrics “Cradle the balls!” ever conceived. (Andy Seifert)