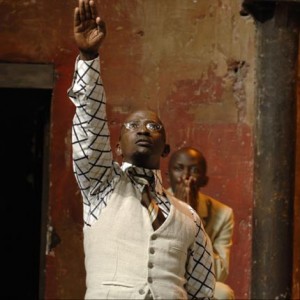 Fresh off Peter Brook’s Bouffes du Nord and the Young Vic in London, the pedigree of “The Investigation” alone is fairly theatrical: it’s a semi-fictional documentary written by Peter Weiss about the Auschwitz-Birkenau concentration camps, based on transcripts from Nazi war trials; adapted by one of the kings of postmodern French cultural theory, Jean Baudrillard; and finally adapted once more by Dorcy Rugamba, Isabelly Dyselinx and the Rwandan theater company Urwintore into a production that points out its uncanny similarity to the 1994 genocide in Rwanda. Weiss’ original play was most noted for its participation in the genre of what’s now called “docudrama,” using verbatim testimony of victims and the officials in the concentration camps, in addition being one of the earliest plays written about the Holocaust. While presenting a new, contemporary parallel/superimposed context for the play, this show also cuts down the original five-hour play to eighty minutes and attempts to universalize its historical moment. Perhaps most appealingly, in contrast to the usual black and white rhetoric that dominates most plays about the Holocaust, Rugamba, who directs the show, told BBC in the fall that what drew him most to the play was that it “exposes the facts clinically, methodically, and allows the public to draw their own conclusions about the stories… It is this method of giving responsibility to the audience that most appealed to me.” (Monica Westin)