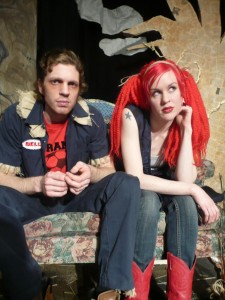 I liked the concept, I liked the set and I liked some of the performances very much, but I did not like Blackbird Theatre Company’s production of Daniel Jackson’s “Into the Pool or The Cheshire Cat Mourns the Death of The American Dream.”  I say this gingerly because there is some good stuff hidden in there.  The story though, drawing on characters from literary works like “Alice in Wonderland” and “The Wizard of Oz”  to explore what happens when youth realizes life is not the stuff of fairy tales, comes across too heavy handed.  It is an interesting world Jackson has created in the backyard belonging to the old lady in the shoe.  And moments of humor  really made me laugh.  It is when characters stop and make statements that sound like they come directly from the author’s program notes that my eyes began to roll.  Blackbird is a young company.  This is the first show of their first full season and I think this young group of artists have a lot more to say.  I have no doubt bigger better work will come from them, but I wouldn’t include this show in any Anniversary season.  Oh, and some good sound would really help. (William Scott)

“Into the Pool, or the Cheshire Cat Mourns the Death of the American Dream” plays through February 1 at the Side Project Theatre, 1439 W. Jarvis. Thu-Sat/8pm, Sun/3pm, blackbirdtheatrecompany.com. $20 adults, $15 for students/seniors and industry.