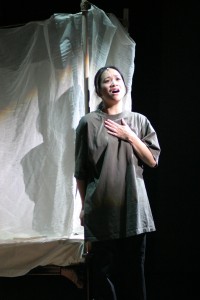 RECOMMENDED
Broadway in Chicago, eat your heart out. Drury Lane Oakbrook’s thrilling and thumping-good production of the Boubil/Schonberg/Maltby musical “Miss Saigon” is by far the best Broadway-caliber musical revival currently not “in Chicago.”

In many respects, it’s better than the original. That staging, that proliferated in the early 1990s and that I saw via several companies around the globe, was certainly something to behold—the raising of a thirty-foot statue of Ho Chi Minh for a “Nixon in China”-like Communist parade, the working Cadillac El Dorado (upon which, of course, the prosthetic-Asian-eye-lidded English actor Jonathan Pryce humped in an orgasmic frenzy), and of course that helicopter (that broke down in mid-air during an early London performance I saw and added an unwelcome thirty-five-minute intermission to the second act). Still, one could argue that the spectacle all but swamped the story, reducing the piece to little more than a lush sounding and spectacularly melodramatic piece of operetta (“Miss Saigon” is through composed—light on actual numbers but heavy on Asian-stringed musical leitmotivs and heavily orchestrated recitative).

Drury Lane’s production, in a lean and fluid staging by director Rachel Rockwell and choreographer Stacey Flaster, also thrills the ears and eyes as there isn’t a weak voice in the cast—the women are particularly strong belters—while musical director Roberta Duchak sustains tension throughout the show’s many shifting tempos. And the production looks gorgeous: designer Kevin Depinet’s structure of slatted bamboo walls sets the right mood and becomes a neutral canvas upon which Jesse Klug’s sumptuous lighting and Mike Tutaj’s smart projections easily create atmosphere (from a fiery sunrise to a boysenberry-colored sunset). As for that famous American evacuation scene, it’s accomplished sans helicopter but with enough imaginative pizzazz to remain a moment of sweeping emotional storytelling and staging. And that’s what makes this revival as good if not better than the original: the emotional wallop it packs. Just try to remain unmoved as desperate men and women claw at a barbed-wire fence (another staging coup by Rockwell and co.), or as bar girls sing about their celluloid-fantasy dreams of acquiring a better life in America while American soldiers mechanically fondle them (a beautiful stage tableau).

I don’t know how successful Drury Lane’s transferred shows have fared downtown these past few seasons, but they would be apt to eventually move this property. Then our city could truly boast of having some quality Broadway in Chicago. (Fabrizio O. Almeida)