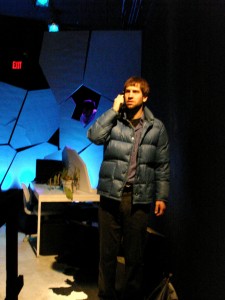 An everyman loses his cell phone after his sister dies in a terrorist train bombing; he spends the rest of the play trying to get it back, almost all of it during or on the verge of emotional breakdown. Along the way he gets involved in an international hacker/spammer ring, occasionally visits a fantasyland filled with Eskimos speaking in “spam language,” and has deeply felt conversations about love and life with the criminal who stole his cell phone on the black market. For all the surreal action in this play, and its ostensible concern with the corruption of language and relationship by various kinds of spam and the undoing of “the glue binding people to who they say they are,” the show’s creative elements are weighed down by a stilted and melodramatic plot line whose clichés overshadow thoughtful elements; and the acting, with the exception of Joel Ewing’s comic instincts, which almost carry the show, is similarly far too weighty and extreme to explore any nuances about postmodern relationships that the writing occasionally suggests.  (Monica Westin)