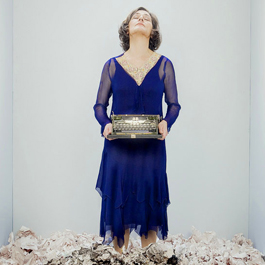 This winter Timeline will present the world premiere of Masha Obolensky’s “Not Enough Air,” which explores the circumstances behind the writing of the play “Machinal,” journalist-turned-playwright Sophie Treadwell’s expressionist tour-de-force attempt to understand the real case of Ruth Snyder’s murder of her husband. We spoke with Obolensky a few weeks ago to examine her own biographical project.

I was immediately struck by the obvious parallel of your work with Sophie’s: “Machinal” asks how one woman could reach a point at which she would carry out such a crime, while “Not Enough Air” confronts why Sophie, a journalist, became so involved in the case that she would write an intensely felt play about it.

Yes, the original hook, what first interested me, was this idea of a woman interpreting another woman, about eight years ago… it’s been a long process. Originally I was going to have the young woman [in “Machinal”] and Ruth played by the same actress, and I’ve been toying with those roles for years. Because it was originally written for a workshop, I thought of it as just a theater piece and shelved it for years, until I decided to drag it out and format it in 2006 for a play festival. Because I’ve been working on it for so many years, [“Not Enough Air”] has turned out to be very layered, as I’ve grown up with it in some ways and come to understand Sophie and “Machinal” on different levels, I hope. I’ve really wrestled with the story, and with the notion of being able to interpret or speak for Sophie, and I hope that struggle comes through as well.

What kind of relationship are you hoping “Not Enough Air” will have to “Machinal”? And how does that play out on the level of say, stylistics—for example, “Machinal” is an extremely expressionist piece that makes use of soundscape and repetition.

Let’s see… how realistic is my play? Most of the scenes are a mix, with a lot of styles clashing up against each other. I suppose I should say first that what I’m presenting about Sophie’s life is comprised of a lot of speculation on my part, especially the scenes of Sophie and her husband [sports reporter William O. McGeehan]. I was intrigued that they lived in separate residences and that, from what I’ve read, as Sophie became more successful, their arrangement ceased to work for him. The scenes with Mac and Sophie I guess would say are more naturalistic; then there’s the whole media circus, which is more like “Machinal,” more abstracted and expressionist… and then as the play goes on, language sort of breaks down in a way, so that the second act approaches the internal process as opposed to the plot-based first act; following the trial, I’ve tried to get in Sophie’s mind. There are pieces of “Machinal” in it, and I ended up mirroring or taking some of Sophie’s techniques, such as lots of repetition, or very packed emotional words that are disjointed. Sound was very important to me, as in “Machinal,” and the director at Timeline is doing his own thing with the sound, while allowing room for that interest of mine.

I’m going to ask the obvious question about identifying with Treadwell, another actress, playwright, woman writer.

One thing that interested me the most was this concept of illness, which ends up being a major theme in the play. Sophie suffered from what was called neurasthenia, and she was in and out of sanitariums so much that you wonder how she managed to write as much as she did. I wonder how much the illness fueled what she did, or held her back. As a coincidence, I actually have something called adrenal insufficiency, which would probably have been diagnosed as neurasthenia back then. In “Machinal,” the young woman is described as having neurasthenia as well, and Ruth Synder, the woman in the trial, is described as having fits. I kept thinking about symptoms and asking—what are these women symptoms of? Are these symptoms still around? And that makes me think about why writing this play now might still matter. Recently in New York women playwrights have been meeting with artistic directors and asking why there are still so few plays being produced that are written by women. Why can’t we speak about this symptom in a way that feels productive— in a recent New York Times article women playwrights spoke of feeling that it just wasn’t up for discussion and that by bringing it up they felt as if they were being perceived as complainers or whiners. The symptoms that preoccupied Sophie haven’t gone away.