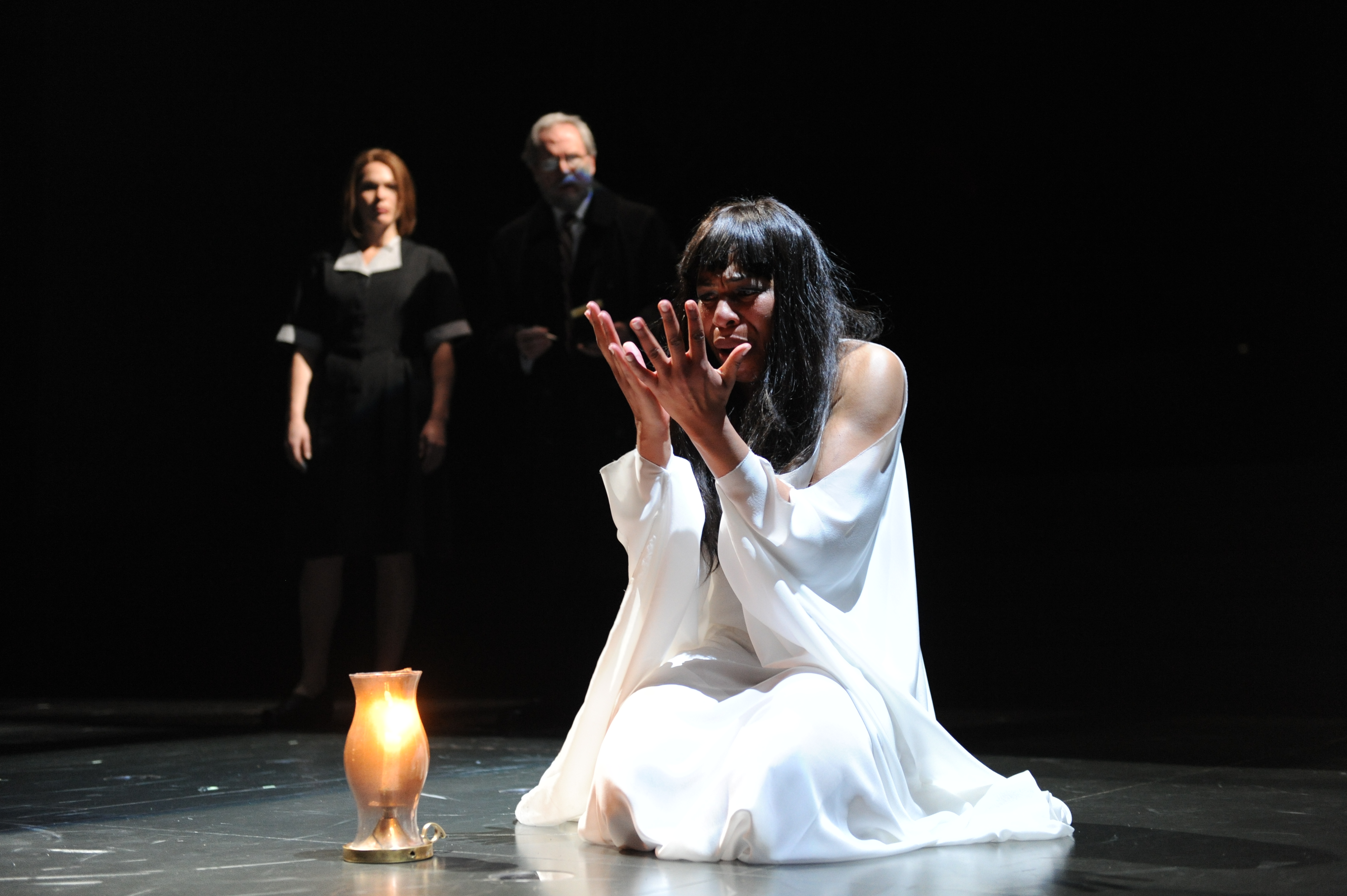 RECOMMENDED
No play has more superstition surrounding it than Shakespeare’s “Macbeth, ” a name and title that traditionally dare not even be spoken backstage nor anywhere near a theater lest it become haunted; hence, the moniker “The Scottish Play, ” a safer alternative that will keep the goblins and witches at bay. That is certainly one interpretation. Another is to see “Macbeth” as conscience gone berserk in blood-lusting after power and, ergo, nothing in the play is taken literally.

And then there is Barbara Gaines, who updates “Macbeth” to the present day but where nothing, absolutely nothing, is left to the imagination. Given how many metaphorical Macbeths roam the moors of our minds, there is something to be said for the novelty of having everything spelled out, however unnerving. And from the opening moments when we see soldiers in commando fatigues machine-gunning those who are lying face down on the ground, we are reminded that however much we think that Macbeth’s era was a more brutal one than ours, think again.

When Lady Macbeth (Karen Aldridge) speaks of her plucked nipples, she does so topless and the audience is staring right at them, fully exposed. The three witches meld in and out of a hoard of paparazzi and journalists and one of them who shows us a bloody, newborn baby is male (Mike Nussbaum), not that it matters much, as they are unisex witches, and their voices during their incantations and prophecies are electronically altered to eerie effect. When Macbeth starts to lose it at the dinner table, we see what he sees: a grotesque, bloody head staring at him accusingly that gradually becomes more real, taking the physical form of a mutilated walking corpse that interacts and chases him, right into the audience. When the children of Macbeth’s rival are murdered, we are mercilessly shown the act, complete with an audible neck crack. Lady Macbeth’s death, the details of which are never spelled out in the play itself, is shown as her naked body in a bathtub of blood, making the suicide often implied in the text explicit.

Macbeth (Ben Carlson) has the physical demeanor of a skinhead and imagines himself as king via video clips of statements that he makes, ironically, which become no longer necessary nor relevant after he actually becomes king. And when an African-American becomes king at the end and those video clips are restored overhead, an analogy to the start of an Obama presidency is made complete.

All of this could be viewed as violent theater of the absurd for its own sake, but whatever we may chose to make of all of this—and I suspect that many will find it all much too much—Gaines’ gratuitous interpretation can be fully supported by the Bard’s own words. In this, the proceedings are a marked contrast from say, Robert Falls’ “King Lear” where the excesses had little if anything to do with the text and where special effects ended up concealing far more than they revealed.

In the end, Gaines’ “Macbeth” gives us plenty of haunting and disturbing images to take away, to be sure, but none more explicit or timely than bearing in mind that all of the excesses come about as the direct result of the potentially corrupting effect of power. (Dennis Polkow)