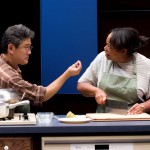 RECOMMENDED
“Medicine is food, and food is medicine” declares the kitchen matriarch Po Momma at one point in Northlight’s world premiere of Kenneth Lin’s “Po Boy Tango,” and so too, is this tightly constructed production a true-to-the-recipe dose of healthy brain-food.

“Po Boy Tango” tells the unconventional story of a friendship between a Taiwanese immigrant now living on Long Island, Richie Po, and Gloria B, the African-American hospice worker who also happens to be the second-best cook he has ever known. The first, his deceased mother, was a celebrity chef in Taiwan, and her presence is conveyed through “video” interludes that punctuate the play. Richie convinces Gloria to cook his mother’s famous banquet for his daughter’s upcoming wedding; in return, he’ll partner with her in a lifelong dream of opening a Southern soul food café. Accordingly, the stovetop provides the backdrop for an engaging journey into the nuances of food, heritage and uneasy racial relations. Anyone who’s spent time cooking with friends and family know what a stew can be made out of the interactions between the participants.

My principal reservation about the production was the use of pantomimed food rather than the real or simulated thing. The play’s description makes it sound like a sensual feast on the order of the movies “Eat, Drink, Man, Woman” and “Big Night”; instead it was like watching children play tea party—not only disappointing but distracting, at least for the first ten minutes or so minutes till I got used to it.  (Brian Hieggelke)