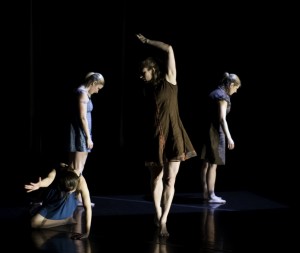 Thirteen ain’t easy. I don’t know a soul who would choose to return to the age when our identities are ruthlessly scrutinized under the microscope of insecure peers and our bodies seem bent on humiliating us, lingering in the wretched stage between unformed innocence and sexual maturity. Yet thirteen is the subject of The Dance COLEctive’s performance this weekend—inspired in part by the company’s thirteenth anniversary this year. Artistic Director Margi Cole feels similar pressures on her company to step outside its comfort zone and mature under challenging circumstances (and states as much at the close of the program). “13” is a highly theatrical piece for TDC; each dancer created a character which is revealed through a series of vignettes, interspersed between duets and ensemble movements, all revolving around the world-wrenching personal dramas between friends, enemies and classmates. Some text is drawn from the audience, who will be asked to write down things they liked (start thinking now) and disliked about being thirteen.

It’s apparent that this is Cole’s first foray into spoken original text—the expository sections run a bit long and literal—but the ungainly, heartfelt moments are apropos: this is a show about the discomfort of growth and the inevitable mixed results of exiting one’s comfort zone. The company as a whole does a remarkable job of internalizing the deportment and attitude of 13-year-olds—from agonizing introverts to cool mean girls—without falling into cliché or, even more incredibly, compromising their strength and grace.

Also on the program is Cole’s comical solo “Superhero,” created, with the help of Liz Burritt, during her recovery from a torn ACL. “A week before my surgery, I said to a friend that, until recently, I felt I was superhuman and was just fine with that,” Cole says. “The injury was a challenge to deal with. ‘Superhero’ came from thinking about my physical limitations and where I want to be.” To describe the piece would undermine its humor, but it complements “13”; the two pieces were developed in tandem and probe those often embarrassing corners of the psyche that so desperately desire to do more, be more. (Sharon Hoyer)