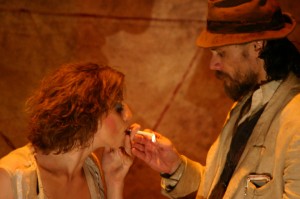 Recently, I found myself defending foreign-language theater to a colleague who loves opera. We were discussing curator Robert Falls and The Goodman Theatre’s ambitious stage event “Global Exploration: Eugene O’Neill in the 21st Century, ” and while he could share my enthusiasm for its controversial (Wooster Group’s “Emperor Jones”), community-boosting (Hypocrites’ “The Hairy Ape” and Neo-Futurists’ “Strange Interlude”) and classic programming (“Desire Under the Elms”), he could simply not understand why anyone would want to see O’Neill performed in Portuguese or Dutch. (The festival, now midway through its run, features theater companies from Brazil and the Netherlands performing the notoriously obscure “Sea Plays” and the rarely staged “Mourning Becomes Electra,” respectively). I can see his point. After all, experiencing some foreign-language theater—the kind staged in the playwright’s native tongue, for example—makes sense. It’s the operatic equivalent of hearing Puccini in Italian, or Wagner in German: the authentic cultural-aural experience. So why do I still think, having now sat through two of Brazilian Companhia Triptal’s three productions of “Homens Ao Mar” or “Sea Plays” (the final installment, “Cardiff,” completes the triptych this weekend) without understanding one peep of Portuguese, that it would be an absolute shame if any viewer missed out on this rare and once-in-a-lifetime experience afforded by the good folks at the Goodman?

I think for me it’s quite simply all about the language. It helps, of course, being a linguaphile and having under my belt a history of international theatergoing that includes not just plays rendered in their original spoken-languages (Chekhov in Russian by the Moscow Art Theatre; Strindberg in Swedish courtesy of The Royal Dramatic Theatre of Stockholm), but also straight plays and musicals originally performed in English but enjoyed in a half dozen other foreign languages. Nevertheless, even without this primer, any curious individual wishing to be provoked by a piece of exotic theater but wary of the potential for pomposity, can rest assured that there is nothing pretentious about or posed by Companhia Triptal that the average theatergoer can’t handle.

So you’re afraid you may not “get it” in another language? All you need to know about “Sea Plays” is that they are informed by a playwright whose early life experiences were spent at sea, and who must have had a love-hate relationship with this siren that tore individuals from—and reunited them with—their families. As well, O’Neill’s early plays were exercises—not always successful—in lacing realistic situations with symbolism and heightened theatricality. Even in English, these plays can come across as ambiguous. Companhia Triptal’s aggressively atmospheric and mood-enhancing staging puts you there and offers a visceral experience not dependent on narrative details.

So you hate the idea of supertitles? After all, why shell out $20 to “read” a play? Well then, don’t. The first installment of “Sea Plays,” whose original English-language text was projected back to the audience via supertitles, was a cumbersome experience if you sat too close to the stage: halfway through the performance I felt like a nodding dog with my head tilting up and down between the words across the sky and the action down on stage. It also seemed at times like the supertitle projector could either not keep up with the actors or vice versa, making for some ponderous pauses (I wondered if this is what it would be like to see Pinter in Portuguese). So for the second installment, armed with a quick scan of the synopsis only, I ignored the supertitles, took in the experience as if I were watching the show in its hometown of São Paulo and learned to appreciate a company of actors whose robust physicality, brandy-soaked vocal instruments and Latin temperament were the perfect interpreters of O’Neill’s motley crew of sailors and whores, as well as of the playwright’s famously demanding and persnickety stage directions. In fact, my relationship as audience member with these Brazilian actors was probably heightened precisely because we could not depend solely on words for communication.

So you know nothing about Brazilian culture? Well, maybe you’ll learn something. In my case, the “global” insights were unsurprising but nuanced and pronounced: a patriarchal culture whose dichotomous existence between beauty and violence—as might be experienced every day on the dangerous streets of Rio or São Paulo—echoed through the ebb and flow of O’Neill’s symbolic sea.

All good stuff, but for me secondary to the unique thrill of letting go, letting the experience wash over me and allowing a foreign language to caress my ear. Inherently disorienting at first, but that’s the way O’Neill’s rough-hewn dialogue—especially at this point in his early writing career—affects some in English. And in the case of the Portuguese, with its emphasis on elongated open vowels, a curious case of unintelligible aural beauty reminding me of this playwright’s later gift for the poetic vernacular. (Dutch’s guttural-heavy pronouncements for the upcoming “Mourning Becomes Electra” will most likely re-emphasize the jagged aspects of O’Neill’s language.)

You’ll be hard-pressed to see, let alone hear, something like this again for a long time to come. And what do you mean you think an Afghan “Anna Christie” sounds like fun?