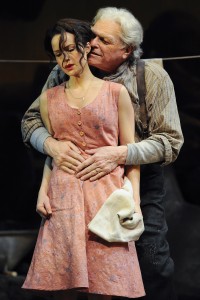 Let’s get right to the point. Robert Falls’ production of Eugene O’Neill’s “Desire under the Elms” exceeds all expectations. And although I cannot quite declare it “the theatrical event of the year”—there are, after all, eleven months remaining—I will concede that this exceptional revival, showcasing a director and design team working at the top of their game, and boasting three mesmerizing performances at its core, is currently the best thing on a Chicago stage and deserves a place on every critic’s “Best Of” list twelve months from now.

“Desire under the Elms,” one of the playwright’s earlier works, is set on a rural New England farm in the mid-nineteenth century. O’Neill stage vet and Chicago adopted son Brian Dennehy plays septuagenarian Ephraim Cabot, a proud paterfamilias whose third marriage, to a wife thirty years his junior (Carla Gugino), threatens to deprive his embittered son Eben (Pablo Schreiber) of what he believes is his rightful inheritance: the family farm that bore witness to Cabot’s tyrannical younger years and the subsequent deaths of his first two wives (one of them Eben’s mother). From there on, “Desire” charts the greed, ambition and murderous passions that drive this father-son-stepmother saga through its Greek-tragedy-inspired twists and Freudian turns.

With this play there exists the danger that a modern audience’s seen-it-all sensibilities could spot these plot developments coming from a mile away, blunting their impact and potentially stripping the play of its original shock value. Falls’ choice to jettison the play’s intermission and present it as one continuous sequence, right through to its depressing denouement, is therefore a smart one. But it’s his overall pitch-perfect and restrained directorial hand that’s responsible for this production’s grab-you-by-the-throat intensity and the fact that not one mundane minute registers during the play’s one-hour-and-forty-minute intermission-less running time. (And given this playwright’s penchant for prolixity, that’s certainly saying a lot.) Indeed, whether navigating three excellent performers safely through O’Neill’s melodramatic meltdowns, using Bob Dylan’s haunting song “Not Dark Yet” for a six-minute musical montage that conveys the longing and loneliness of rural existence, or creating stunning stage tableaus, Falls proves why he is the foremost directorial interpreter of O’Neill working in the American theater today. To this end, he’s aided by Walt Spangler’s stunning set design, Michael Philippi’s exquisite lighting plot and Richard Woodbury’s original music and sound design. Their work each merits more praise and attention than I have room to give it here, but overall its combined effect is one that adds and sustains—in some cases quite literally—the play’s dramatic tension.

Finally, there are the three leads. Schreiber expertly modulates his character’s internal journey from hatred to love, and his rugged handsomeness and bursts of virility make for some searing sensuality. Gugino, a beautiful and sexy actress who resembles a young Barbara Hershey yet sounds like Judy Davis—thanks to a husky vocal instrument that makes full use of its earthy chest tones—plays her role like it’s a warm-up to take on Maggie the Cat. (Her feral ferocity is evident from the moment she first rubs the palm of her hand—and eventually herself—upon the floors and furniture of the farmhouse.) Last but not least, there is Mr. Dennehy, an actor who could have plowed through his part and made this “Desire” about one man’s tragedy. Instead, through an understated performance that ultimately uncovers more sympathy for his character than O’Neill affords him in the script, Dennehy unselfishly shares the spotlight and allows this tragedy to belong to three individuals. Classy and admirable. Just like everything else in this perfect-storm of a production. (Fabrizio O. Almeida)