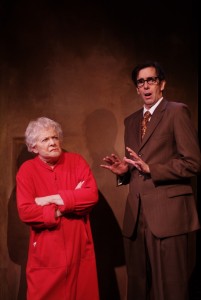 Unadulterated farce that spirals downward in tone from running gag to cheap trick. A dweeby educational-film-strip editor attempts to enact a self-help book’s rules in order to seem more interesting and instead becomes entangled in a Harold-and-Maude relationship with his eccentric landlady and in the mystery of her late husband’s death. Unfortunately, despite director Russ Tutterow’s shrewd impulse to make the play as much of a spectacle as possible, complete with strobe lights and a male stripper performing in a g-string apropos of nothing, he can’t overrule the show’s tired parade of cliché. While some blame can be shared with the actors, who undeniably ham it up, hitting the same situation-comedy note for more than two hours straight, the problem lies in the writing itself, which consists of never-ending sexual innuendo, stereotyped characters and tropes overworn to the point of numbness (joke about a gun-collecting postal worker, anyone?). There are some effective comedic moments—the geek attempting to set the mood for seduction with Gregorian chant, for example, and a well-timed description of a character who looks like “a young Oliver Laurel with a mustache or an obese Adolf Hitler” (this is also one of the least-offensive lines in the play)—but more often than not the jokes feel spelled out for the audience, and long after we’ve anticipated them. (Monica Westin)