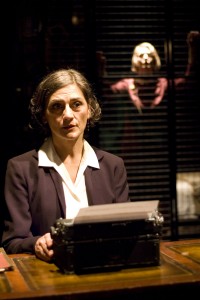 Ruth Snyder’s 1928 trial for the murder of her husband was the Simpson trial of its day; the same brutal violence, the same media sensationalism. Journalist Sophie Treadwell covered the trial and, in her pioneering play “Machinal,” explored the societal restrictions that might force a woman to snap. Timeline Theatre Company’s “Not Enough Air” is a fascinating look at Treadwell’s creative process and her struggle to shine a light on women’s issues.

The crackerjack ensemble masters the fast-paced staging and rapid-fire language. Each performance is strong and well-defined; standouts include Terry Hamilton and Danica Ivancevic in their many roles. The second act drags slightly as Treadwell (Janet Ulrich Brooks) confronts the figurative (and literal) ghosts that haunt her; she and her husband, sportswriter William O. McGeehan(the charming David Parkes), must avoid the pitfalls of their unconventional marriage. But Brooks never lets Treadwell’s fire extinguish; we see how Treadwell’s passion comes close to consuming her. (Lisa Buscani)