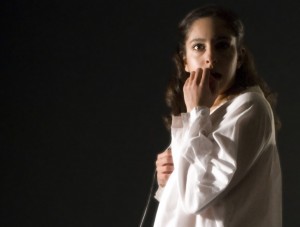 There is a lot to like about the aesthetic impulses that drive Court Theatre’s artistic director Charles Newell. The guy is unafraid to tinker with the classics; everything “proper” is given the heave-ho and suddenly a play you thought you had all figured out seems uncommonly new and unexpectedly urgent.

I had high hopes for Newell’s take on Henrik Ibsen, and yet behold his current production of “The Wild Duck” (at the MCA). To say this staging left me cold is an understatement.

Ibsen’s drama of secrets and lies has always been tricky, with its insistently self-centered men and the women yoked to them. Ibsen himself anticipated “plenty to quarrel about, plenty to misinterpret.” The personal losses pile up like so many felled logs, that much is certain.

But if anything, the Court production exposes the play for what it really is: the proto family sitcom, easy on the com. Dad as infantile idiot; Mom as Practical Patty; Grandpa as eccentric; plus the requisite Preteen Kid and a Neighbor who drops in for a bon mot or two. It’s “The King of Everybody Loves Yes, Dear,” nineteenth-century Norway version. It’s not that Ibsen’s script isn’t funny (in its own way), but you’ll find little of that here.

Something about Newell’s approach has a pile-driving affect. Jay Whittaker is Gregers—the pot-stirrer who inadvertently destroys an entire family in a deranged sense of honesty and morality—and Whittaker is perhaps too obvious in his physical manifestation of the character. The hair is greasy, the body language full of tics. Everything about this man suggests trouble and I wonder if Newell had pushed for something more internal and composed, it might have created a much-needed elusive quality. Gregers’ motives should tap uncomfortable nerves—who among us hasn’t been blinded by principle?—but as it is, you just hate the guy on sight.

So what of the family he splinters like so much wood in the chopper? Kevin Gudahl’s Hailmar is appropriately childlike; Mary Beth Fisher, as his doting spouse, gives the role that frozen stare seen in the wives of stunted men.

But their cozy life is anything but. Leigh Breslau’s set design is gorgeous—a gaping warehouse loft straight out of “Rent”—and yet it exposes an emptiness in the production.  The family sits on the sofa clasped together in a Norman Rockwell embrace and it’s all you can do to not to roll your eyes. The artifice is stultifying, which may be the point. The fantasy must give way.

Ignorance is bliss, but what of the unexamined life? I’m not sure Ibsen was entirely convinced one way or another about the question of honesty versus delusions. Both have to exist to propel you out bed every morning—I’ll pretend my life isn’t as bad as it is in the hopes of making room for things that are genuinely pleasurable. Isn’t that what we call growing up?

It is only Timothy Edward Kane as the doctor—a dangerous man in his own right, with little patience for the artificially induced tragedy before him—who offers something to grab onto. Kane’s performance commands your attention, his voice low and pissed off and full of brine. Fuck you, he all but tells this group. Fuck you and figure out a way to live your lives. The alternative is to sink irretrievably to the bottom of the sea like so many ducks shot from the sky. (Nina Metz)