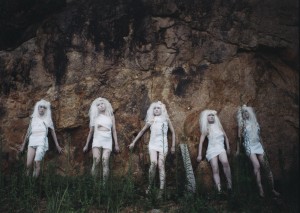 The first time I saw an anime, some fifteen years ago, I felt as though I were watching a dream projected on the screen; while beautiful and obviously symbolic, the movie was weirdly indiscernible to me: the images, narrative structure and character motivations were somehow off—so deeply different, deeply other, from any foreign film I’d seen. There was something I should grasp, but couldn’t grab hold of for the unfamiliar rhythms of the story. The first experience watching contemporary Japanese dance can elicit a similar reaction—a gorgeous, magical bewilderment as the western mind churns to decode temporally elastic, slow-to-near-imperceptible movements or sustained, balls-out tantrums—transformative meditations on the grotesque and transcendent. This weekend, the Dance Center of Columbia College offers a sampler platter courtesy of three extraordinary Japanese companies: Nibroll, which presents the latter; Sennichimae Blue Sky Dance Club, masters of the former; and the breath-suspending Baby-Q, whose collaborative “E/G Geometria” revives the maligned term “performance art.” Each group presents an excerpt from evening-length performances—digestible chunks that will doubtless ease the disorientation described above, but will not, I very much hope, amputate each piece before it clutches at the divine.

Six members of Nibroll will perform part of “Coffee,” an unrelenting frenzy of grasping, shoving, screaming and—yes—occasionally pouring coffee, before massive projections of birds in flight, animated scenes of a city besieged by a giant fluffy monster and film of a toddler spilling her milk. Clusters of mobiles hang above agitated dancers in street clothes who collide, collapse and drag one another across the stage. The frenzy is followed by Butoh-based Sennichimae Blue Sky Dance Club in an excerpt from “End of Water.” The juxtaposition is like witnessing a fifteen-car pileup and then retreating to an empty field to watch a flower bloom. Molasses-paced Butoh can place high demands on an audience, but a receptive viewer is rewarded in kind; the snail’s pace locomotion and spare gestures are so deeply generated that it makes classical European dance look unmotivated and frivolous. The program finishes with an excerpt from “E/G Geometria,” a collaboration of noise music, brilliant lighting design, solo movement by the captivating Yoko Higashino, and a touch of robotics that converge in an atmosphere of a Japanese horror film. Haunting, stunning, dreamlike. To experience the vision, don’t try to figure it out. (Sharon Hoyer)