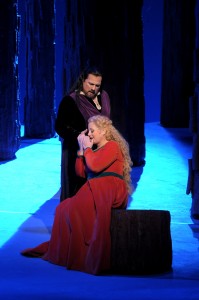 There is good news and bad news for Wagnerites this week from Lyric Opera: the good news is the opening of the sumptuous David Hockney production of Wagner’s “Tristan und Isolde” with Deborah Voigt as Isolde, a feast for the eyes and ears that opulently ends the Wagnerian famine that Chicago has endured since the revival of Lyric’s “Ring” cycle four seasons ago. The bad news is that, enjoy “Tristan” while you can, as often as you can, since Wagner is nowhere to be found in Lyric’s 2009-10 season announcement. Prior to “Tristan,” there was a multi-year Wagnerian drought here which was bizarrely justified on the basis of the company devoting the same resources to productions of Richard Strauss, but there is no Richard Strauss to be found next season either. Tough times have cut Lyric’s usual eight and mostly Italian-centered operas to six with the other two slots being allotted for warhorse operetta (“The Merry Widow”) and a staged cantata (“The Damnation of Faust”).

It’s not just a matter of money vs. art, but as current general director William Mason’s late predecessor Ardis Krainik put it when she put together the company’s first “Ring” cycle more than a decade ago and spearheaded the move to perform Wagner every season that lasted until Mason took over, “If you want to be taken seriously as an international company, you have to do Wagner.” More to the point, doing Wagner is the pinnacle of the art form and stretches a company’s artistic muscles to its aesthetic limits and brings higher quality to everything else it does. This is the reason that former Chicago Symphony music director Daniel Barenboim broke the Israel Philharmonic Wagnerian ban a few years ago, noting that the orchestra would never reach its potential and would remain a “second-tier” orchestra “much like a theater troupe that avoided the challenges and depth of Shakespeare” until it began performing Wagner—bread and butter for the CSO and the other great orchestras of the world—on a regular basis.

“Tristan” is the work that ushered in the Wagnerian revolution that still resonates nearly a century and a half later, culminating the Romantic era and pointing ahead to the breakdown of tonality in the twentieth century and even peculiarly yet routinely still blamed for world wars. “Tristan” is to art what Darwin’s “Origin of Species” is to science and what Marx’s “Communist Manifesto” is to politics and all art since has either embraced or tried, mostly in vain, to step around its immense influence. So compelling is the tight fusion of music and drama that past sets and stagings have been minimal so as not to overtax the audience and indeed, during the current production’s iconic “Prelude,” the stage is darkened and only the title of the work and the composer’s name can be seen, making the pop-art cutout mostly turquoise, deep blue, red and lavender world of David Hockney seem all the more jarring as it emerges. Inspired by the philosophy of Schopenhauer, Wagner uses light and dark in his libretto to contrast the blinding, everyday world that the lovers are caught in against the deep night that becomes nature’s hideaway as well as the metaphor for the traversal of death that will reunite the lovers in transfigured form. This light and dark contrast is vividly portrayed by Hockney, though his idea of “dark” is a world of color enlivened and intensified by the love that Tristan and Isolde each feel for each other and is a far cry from a work often viewed via Expressionism, a later twentieth-century movement whose seeds were sown in “Tristan.”

To show how much time has passed since Lyric last did any Wagner, soprano Deborah Voigt was last seen in a Wagner role twice the size that she is now doing—the minor role of Sieglinde in “Die Walküre”—but has come back to her hometown as the international Isolde of choice, where her Vienna debut in the role reportedly brought a twenty-three-minute standing ovation. Indeed, this production was built around her, and she does not disappoint. We are indeed fortunate to be living in an era of such a stellar Wagnerian soprano at the height of her powers. Unfortunately, there is a dearth of heldentenors at the moment, and though Placido Domingo—last heard at Lyric singing Siegmund—did a wonderful job in the title role on a recent complete “Tristan” recording, he will not tackle the role on stage, and Ben Heppner, who did a magnificent job with the role here in 2000 opposite Jane Eaglen, has had a series of vocal problems and canceled most of his Met performances with Voigt.

Lyric engaged American tenor Clifton Forbes who, on opening night at least, was not able to dynamically match nor blend with Voigt, particularly in the extended Act II love duet, which most consider the heart of the opera. His is a dark, almost baritone-like timbre which while not suited to the love music, is eerily effective during the daunting Act III death soliloquy where he hallucinates Isolde’s return so vividly that he is able to virtually “will” her presence to his side. When Isolde finally shows up after the king has forgiven them and her lover is dead, Voigt steps onto another planet with an unnerving and haunting yet beautiful and poetic “Liebestod” where she “sees” and approaches her lover waiting on the other side, compelling her to die and cross over into the ecstasy that neither could sustain in this life. (Dennis Polkow)