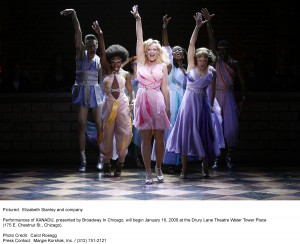 I never saw the Broadway production of the musical “Xanadu” but I imagine it was far superior to the sloppy seconds that Chicago audiences have been given at the Drury Lane Theatre at Water Tower Place, courtesy of Broadway in Chicago.

Like any respectable musical-theater queen there’s a big place in my heart for the 1980 film “Xanadu.” The late legendary Gene Kelly, whose participation must have been predicated on the notion that “Xanadu” would help usher in another period of great MGM-style movie musicals—on roller skates! Olivia Newton-John’s comical attempts to execute Kenny Ortega’s ballet-inspired opening number, especially whenever lead muse (and one time Fosse-muse) Sandahl Bergman would dance into the shot! Michael Beck’s scenery-chewing performance! Whether you wore out your VHS copy watching it in delightful disbelief with friends growing up (as I did), or sang along to it at Sidetrack’s on a Musical Monday night (as I also did quite regularly in the earlier part of this decade), “Xanadu” was an experience.

I don’t know that the stage show offers any experience, let alone anything that might even qualify this as a fun and fabulous guilty pleasure. Clearly, the biggest problem is with Christopher Ashley’s direction. You can’t force camp, and yet every half-assed joke and lame visual pun has been overly telegraphed and repeated to the point of ineffectiveness. I did laugh a few times: Elizabeth Stanley’s breathy delivery of some stupid lines; the thick Australian accent. But overall I found the ninety-minute intermission-less stage experience tedious, dull and uninspired. And yet the creators seem content to justify their crude commercialization—I certainly would not call it clever adaptation‚—of the original material by using “Xanadu” to make an ironic comment on the paucity of creativity and intelligence that saddled the musical theater in the 1980s. Can you say, pot, kettle, black? And then there’s the obligatory snide remark towards composer Andrew Lloyd Webber, who of course is responsible for everything that’s wrong about the musical theater today, as well as his roller-skating Broadway musical spectacular, “Starlight Express.” To the creators of “Xanadu” I can only say this: I’ve seen “Starlight Express,” in London, New York, Las Vegas and in Germany, and you, “Xanadu,” are no “Starlight Express.”

But whatever the show’s ultimate artistic merits, the second-rate production values of the Chicago staging are disconcerting, especially on the heels of such polished tours like “Jersey Boys” and “Wicked.” (And even when compared against Drury Lane’s other tenant in its suburban venue, “Miss Saigon.”) Clearly, this is a big misstep for Broadway in Chicago, and I don’t see “Xanadu” running long or appealing to many theatergoers. Because if this camp-loving, ELO-listening, gay roller-skating lover of “Starlight Express” thought it was crap, what hope is there for you to like it? (Fabrizio O. Almeida)