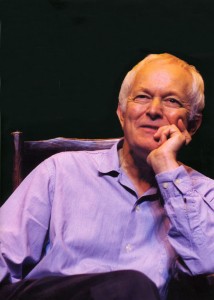 “Here’s the story. I’d been playing Hamlet for the RSC [The Royal Shakespeare Company] for two years and I had finished it. And when you do something like that people ask you very, very serious questions. ‘Now, what’s the next great mountain you’re going to scale? What’s the next great role?’ And the first thing I was offered was five days—it might have just been four—on this new ‘Star Wars’ movie. And I thought, ‘Oh, that’s a funny idea to come off of ‘Hamlet’ into that. I’ll do it straight away.” The role was Imperial Commander Moff Jerjerrod in 1983’s “Star Wars Episode VI: Return of the Jedi,” and the man discussing his career is British actor Michael Pennington, on the phone from his home in London ten days before his scheduled arrival into Chicago for “Sweet William,” his one-man Shakespeare show at Chicago Shakespeare Theatre. The “Star Wars” saga continues…

“And I did this very, very small part—I never thought twice about it—and now get a regular mailbag from fans who’ve downloaded pictures off the Internet and want them signed. They don’t want them personalized, of course, because they’re going to sell them. So always I personalize them.” 4,000 miles away, Pennington’s mischievous chuckle registers loud and clear.

The saucy sense of humor is refreshing, especially coming from a man considered to be a stalwart of the classical British stage. Indeed, he was part and parcel of an unusually rich vintage of serious Shakespeare interpreters (including Judi Dench, Ian McKellan and Patrick Stewart) who helped cement the reputation of the RSC in England and around the world throughout the 1970s. And his Hamlet—which in 2008 was cited by British theater critic Michael Billington of the Guardian as one of the top ten defining performances of that role of all time—was the subject of Pennington’s 1996 book, “Hamlet: A User’s Guide,” a part performance diary and part analytical riff on the role. Not surprisingly, it’s this lifelong fascination with Shakespeare, that began at the age of 11 when his parents first took him to see “Macbeth” (“I was extremely unwilling to go and yet the subsequent two hours changed my life”) and is responsible for some 20,000 performance hours over a forty-year career, that informs “Sweet William.” “I’m really accounting for my own lifetime with him, trying to say some things about the man that perhaps come as a surprise, as well as do some pieces which aren’t necessarily the most familiar or expected ones.”

You might say “Sweet William” also brings Pennington full circle back to Chicago. “There is a little bit of a trail running back about twenty years as far as Chicago and I are concerned,” explains the actor. “Back in the late 1980s, when I had my English Shakespeare Company (ESC) with [co-director] Michael Bogdanov, we came and played our seven play history cycle [“The Wars of the Roses”] which was quite a big success. It was the first time I really experienced the warmth which Chicago extends to visiting theater companies if they think they’re good. We played the Auditorium. It was absolutely wonderful and I always remember it as a real highlight of what was in fact a three-year tour altogether.”

The more Pennington goes on, the more he sounds like a Chicago theater vet waxing nostalgic. When discussing the ESC double bill of “Twelfth Night” and “Macbeth” with which he toured a few years later, he remembers them playing at the Blackstone Theater, now the Merle Reskin. (“It was up on Wabash somewhere.”) And when, in 1995, he directed American actors in a new production of “Twelfth Night,” he recalls that Chicago Shakespeare Theater was then called the Chicago Shakespeare Repertory, and that they performed at the Ruth Page Theater. Pennington, who subsequently returned to Chicago to celebrate the opening of CST’s new home on Navy Pier, considers “Sweet William” a sort of follow up to all this. Or, as he simply puts it, “The latest development in a gentle but long-lasting relationship with Chicago and with Barbara Gaines’ [Chicago Shakespeare Theater artistic director] company in particular.”

Still, an insider’s knowledge of the Loop isn’t the only surprising thing coming out of Pennington. On the old guard: “As much as I admire and have regard for the great actors of the past—and I knew Gielgud and Olivier and Richardson—any old-fashioned style of playing or production that fails to keep pace, or that lets itself fall behind is going to lose its audience.” On Shakespeare’s relevance today: “It is relevant today. But there are things that are a little uncomfortable and not relevant today. But something about him seems to speak to us all the time. I mean, I haven’t taken the time to look but you’ll find something about Barack Obama in Shakespeare somewhere.” On American verse-speaking as being inferior to the British: “I would repudiate that on the whole. You have as much right to this language as we do and there is an American way of speaking this stuff which is absolutely as good as the English way.” On being part of the exclusive Hamlet club: “To be honest with you, I don’t often go and see Shakespeare and I haven’t seen a ‘Hamlet’ for years. I’m afraid that’s battle fatigue.” And, of course, on “Star Wars” conventions: “I draw the line at them, I’m afraid. Actually, I don’t even know the story of the films so I suppose I’d be regarded as a bit of a heretic.”

And what if those “Star Wars” geeks made a pilgrimage to Navy Pier? “I’d be very happy about it. Yes, maybe we’d turn a nice profit for Barbara. It doesn’t matter to me. I’m glad people are aware of me for some reason or another.”