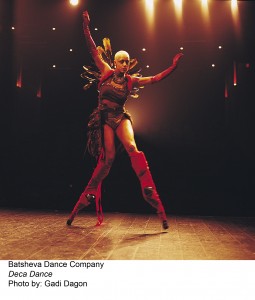 Batsheva Dance Company may be one of the most fascinating companies in the world.  If  that is so, then Ohad Naharin, the company’s artistic director, must be one of the genius choreographers of that world. Naharin’s work is familiar to Chicago.  His “Minus 16” has become an audience favorite in Hubbard Street Dance’s repertoire.  Based in Tel Aviv, this weekend the Israeli company will be at Auditorium Theatre bringing selections from ten of Naharin’s  best creations in a program called “Deca Dance.” I caught up with Brett Batterson, Auditorium’s executive director and a man who shares my excitement for this company.  We put together this short list of just a few reasons to go see Batsheva.

1. “Anyone who creates a new style of movement and has it accepted around the globe is obviously unique,” says Batterson.  The style is called Gaga and it was developed on the bodies of this company so no one does it better. The company’s Web site describes it like this: “At once we, the users, can be involved in moving slowly through space while a quick action in our body is in progress.”  The best way I know to describe it is it has characteristics of one of those inflatable waving tubes you see by car dealerships…but beautiful.

2. “The company is not afraid to try new ideas in their work and challenge the status quo a little bit.  For instance, Batterson explains, “the upcoming performances at the Auditorium include some brief nudity and mature language, but both are used to emphasize the message of the work.  It is not about simply shocking the audience or as an attempt to be hip and trendy.”

3. “The company helps build bridges between Israel and other communities around the world,” Batterson feels.  It has been fifteen years since Batsheva came to Chicago and it seems to be an opportune time.  Just when the entire world could use a few bridges.

If you want to know more, visit Batsheva’s website (batsheva.co.il), or go on opening night (February 7) for the opportunity to hear Naharin speak at a post-show discussion. (William Scott)