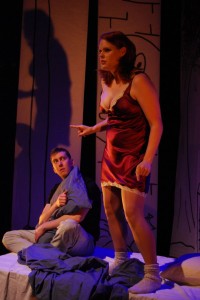 Shel Silverstein was a naughty man.  When he wasn’t writing beloved children’s literature he was publishing naughty cartoons and contributing to Playboy.  “An Adult Evening of Shel Silversein” is a string of his short plays that captures the author’s musings on topics nowhere near where the sidewalk ends.  Sex, marriage, bureaucracy and a dead pony for a 13-year-old girl all get a little stage time. This play is hilarious, at least as written.  In the hands of  The Shadowmen and director Lavina Jadhwani something happened. The positives are many.  The cleverly constructed paper set by Matthew Buettner creates a versatile playground out of Silverstein’s drawings.  Christine Ferriter’s lighting design is subtle and detailed. Regrettably though, a few of the actors don’t understand where the humor is.  Scenes like the aggressive interrogation of the man responsible for the phrase “Have a nice day”should be  played with absolute sincerity.  Instead, it is screamed at the audience. In the end a few bad performances overpower the better ones and leave me wanting to see the show again with different people. (William Scott)