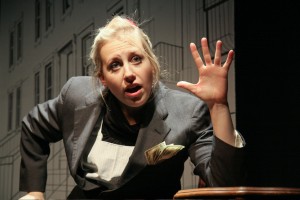 Memorably described as “Performance Art’s answer to the historian Studs Terkel, ” Anna Deveare Smith burst onto the theater scene in 1992 with “Fires in the Mirror, ” her documentary account of the 1991 riots that rocked Crown Heights, Brooklyn, after a car driven by a Hasidic Jew accidentally ran over and killed a 7-year-old black boy, and after a group of black men—in retaliation—stabbed another Hasidic Jew from the community to death. From the victims’ family members to opinionated bystanders, from civil rights activists to noted academics, Deveare Smith conducted dozens of interviews and then regurgitated these verbatim on the stage through a mosaic of unedited monologues. Director Ann Filmer’s concept for her revival, which opens 16th Street Theatre in Berwyn’s second season and which carries the blessing of Ms. Deveare Smith herself, is to distribute the performing duties of “Fire’s” twenty-six characters among four women of various ethnicities and cultural backgrounds, and therefore testing a thread that runs through all of Ms. Deveare Smith’s investigative journalism as theater pieces: when it comes to presenting the words of others, who has the right to speak for whom?

Filmer’s undeniable passion in the presentation of this material, as well as the piece’s topicality and gripping subject matter, make a good case that everyone can have this right, especially if the message is important enough. And so I experienced no difficulty seeing a Caucasian woman playing the Reverend Al Sharpton, or an African-American woman speaking for a male Hasidic rabbi—like all the portrayals adopting the speaker’s cultural patois, unique speech rhythms and vocal idiosyncrasies. It’s all part and parcel of an urgent theatrical discussion that the Chicago theater community is having with the country (Wooster Group’s “Emperor Jones” in blackface at the Goodman earlier this year, American Theater Company’s Caucasian cast “Topdog/Underdog” premiering this month, are just two more examples). My only reservation is with Filmer’s choice to imbue the production with a lot more “acting” than I think it needs. Whereas Deveare Smith’s original presentation of the material must have surely been a whirlwind tour de force experience—ninety minutes I have been told by those who saw it—Filmer’s production, clocking in at more than two hours, ultimately draws unnecessary attention to the fact that many of the monologues are in actuality dense and meandering affairs that test one’s concentration. Whereas Deveare Smith’s spaghetti theory of dramaturgy approach to the material—throw everything at the audience and see what sticks—would have benefited from a quick and simple presentation style allowing the viewer to take what they will, Filmer’s focus on painstakingly setting up each scene as a small play truncates the overall rhythm and transforms the material from a collage of feelings into a series of important-sounding civic lessons.

That’s not to say that Filmer’s hard-working and confident quartet of actresses don’t give their all to this piece. They do. And more. As well, there’s no denying the searing theatricality that dazzles the eyes and ears: smart projections; crisp chiaroscuro lighting; a moving score and gritty song selection that captures urban American circa the early nineties; all of this amounting to—at least intellectually—a satisfying evening in the theater. Still, while the experience hasn’t been hurt by this approach, I can’t help but wonder: has it been helped? (Fabrizio O. Almeida)