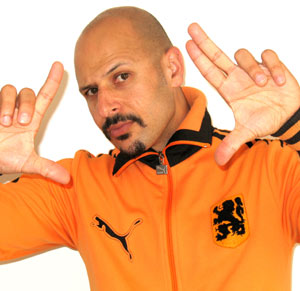 “You’re jealous, I’m in the Axis of Evil, and you’re not.” — that’s how Iranian stand-up comedian Maz Jobrani likes to break his ethnicity to his audience. A regular fixture on the Middle Eastern “Axis of Evil Comedy Tour,” Jobrani’s show unabashedly exploits the social baggage attached to his Iranian heritage, playfully poking fun at stereotypes, deriding the stupidity of political leaders, and goofily depicting the pratfalls of racism. Jobrani doesn’t shy away from depicting Mahmoud Ahmadinejad drunk-dialing George W. Bush, doesn’t back off in ridiculing the absurdity of people that think he has inside information on gas prices or the never-ending news coverage of Middle Eastern protesters burning things. “They always show the crazy guy, burning the American flag, screaming ‘death to America!’ Just once show us doing something good,” he pleads. “Just once show us baking cookies or something. Cause I’ve been to Iran, we bake cookies. Never gonna happen, though. Even if they did that, they’d follow it up with, ‘This just in, a cookie bomb just exploded.'” (Andy Seifert)