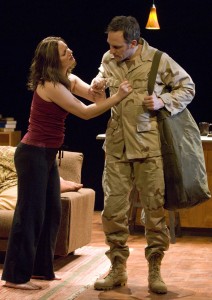 Real-life dysfunction sucks. But as New York Times theater critic Charles Isherwood recently put it, “What might appall us in reality—the unearthing of duplicity or betrayal—can delight in drama.” Or so you hope.

Which brings us to Christopher Shinn’s “Dying City,” receiving an impeccably designed if starchily executed production at Next Theatre in Evanston. To exist in the world of this play is to be wandering a field of land mines. Not a single relationship here functions as it should. Too bad you don’t believe a minute of it.

A single actor (Coburn Goss) plays identical twin brothers: Peter is the self-involved actor; Craig is the straight-laced military man. A third character, Kelly (played by Nicole Wiesner), is Craig’s wife. She is a therapist by trade, but a lousy tactician when it comes to handling these velvet-gloved manipulators. Both brothers project their pathologies onto this woman as if she were a science experiment. It’s all disguised as love or concern or the desire for connection, and Kelly takes the bait.

Their secrets and lies unfold on a raked stage (Jim Davis is the scenic designer), tipping the actors forward—it’s as if any moment, the characters will tumble over the ledge into an abyss of their own making. It’s a canny visual that suggests there’s more to this production than there really is.

Craig has died in Iraq (we see him in flashbacks) and a year afterwards Peter shows up on Kelly’s doorstep to hand down a reckoning prettied up by his politesse and faux naïf ponderings about who Craig really was.

But the production itself (directed by Jason Loewith) lacks focus and psychological snap. Neither actor, I think, is quite right for their roles; very little here feels true or dangerously close to something resembling life. This more like “life.” But what is this play really about anyway, once you strip away the cat-and-mouse façade? Judging by this production, not much at all. (Nina Metz)